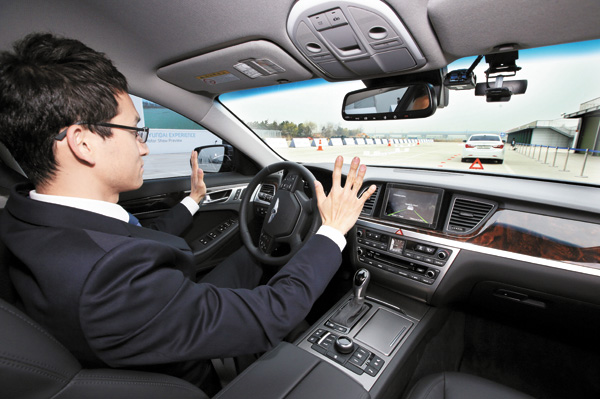 A Hyundai Motor employee demonstrates the automated Traffic Jam Assist system on a Genesis in Songdo on Tuesday. Provided by the company

SONGDO, Incheon - A gray Santa Fe SUV and black Genesis sedan on a track at Songdo in Incheon start moving forward slowly, but a white Sonata sedan abruptly cuts between the two cars. The trailing Genesis responds quickly, stopping before it collides with the Sonata.

It wasn’t the driver who prevented an accident. It was Traffic Jam Assist, a driverless system developed by Hyundai Motor. The Genesis driver had his hands off the steering wheel, but the system detected a collision risk and automatically stopped the car.

The system is designed to control braking, acceleration and steering in congested road situations at speeds of 20 to 40 kilometers per hour (12 to 25 miles per hour). It also maintains a set distance from the car ahead. 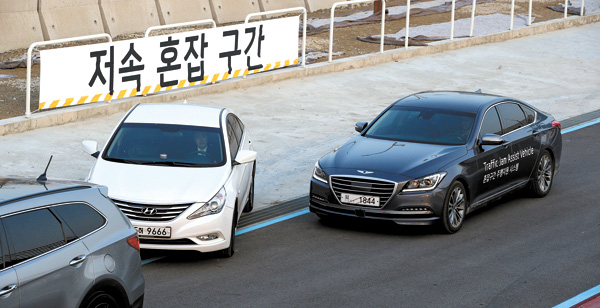 A Hyundai Motor employee demonstrates the automated Traffic Jam Assist system on a Genesis in Songdo on Tuesday. Provided by the company

Hyundai Motor unveiled some of the high-end technology it has been working on since the beginning of the year for the first time on Tuesday ahead of the 2015 Seoul Motor Show that begins with a media preview Thursday at Kintex in Ilsan, northern Gyeonggi. The show runs through April 12.

The company said it will commercialize Traffic Jam Assist by 2020.

As part of the driverless initiative, Hyundai Motor will first commercialize Highway Driving Assist, which offers a partial driverless system on highways, by the second half of this year, which will be a first for Korean automakers.

The company already has added some safety options on its cars, including a lane departure system that issues a warning when the vehicle leaves its lane.

Highway Driving Assist is more advanced. It will allow a car to drive itself while not departing from its lane with Lane Guidance System and keep a safe distance from other vehicles with Advanced Smart Cruise Control, which will operate in conjunction with a navigation system that provides traffic information in real time.

The system will be installed first on Hyundai’s flagship Equus sedan, which will be introduced in the second half of this year.

The company said driverless systems will develop quickly fast because of demand, advances in car IT and also an increase in the average age of people driving cars.

Recently, IT companies such as Google jumped into the industry and the number of parts related to driverless systems is expected to grow to 200 million in 2020 from 70 million this year.

In addition to such new in-house technologies, the company will try to commercialize other advanced systems, such as Remote Automatic Parking Assist, which will be an upgraded version of the Advanced Smart Parking Assist System already available on some Hyundai vehicles.

“Making safe cars has become a very important issue in the industry lately,” said Jung Rag, executive vice president and general project manager of Hyundai Motor. “We will keep working on the smart car to become a leader in the business.”

The company will display many new technologies and 42 cars at the Seoul Motor Show.