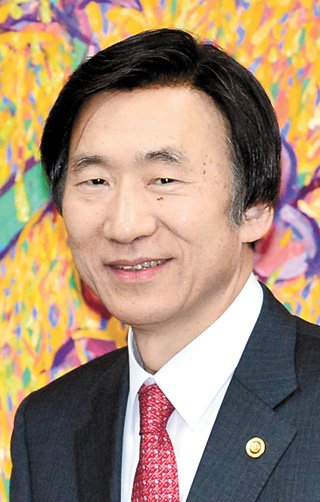 Foreign Affairs Minister Yun Byung-se landed in hot water for a remark Monday saying that Korea being sandwiched between two superpowers is not a dilemma but a blessing.

In a speech before fellow diplomats at the Foreign Affairs Ministry, Yun said, “The current situation in which we are getting ‘love calls’ from both the United States and China because of our strategic value should not be considered a headache or dilemma. Rather, it is a blessing.”

A “love call” is Konglish for a love letter or a beseeching phone call.

Yun was rebuking criticism that the Foreign Ministry has failed to address complex issues involving superpowers China and the United States competently, in particular Korea’s decision to join a new China-backed development bank and to deploy a U.S.-led missile shield.

Yun told diplomats to not worry about “irresponsible criticisms that lack hard thinking.”

While Beijing was pressuring Seoul to join the AIIB, Washington was pushing it to deploy the Terminal High Altitude Area Defense (Thaad) system on the Korean soil.

Washington opposes the AIIB, while Beijing worries that the U.S missile shield is intended to monitor its airspace. Washington has not yet made an official request for the Thaad deployment.

Yun’s remark prompted a backlash in political circles and among diplomatic experts. Some said his definition of a “blessing” lacked depth and other said that it was a strange remark to make public.

“Considering his stature as the head of the Foreign Affairs Ministry and the fact that he was speaking at a public event, it was an imprudent remark,” said a foreign affairs expert who spoke on the condition of anonymity.

“Engaging in diplomacy involves a national image overseas and is highly associated with national pride,” he continued.

“On that note, it was inappropriate for Yun to assess the current situation as a blessing or to say Korea had been blessed.”

Choi Kang, vice president of the private Asan Institute of Policy Studies, agreed that Yun should have been more careful in his words.

“It may be too much of a stretch to call it blessing,” Choi said. “But it is true that both China and the U.S. need us [for their strategic calculations]. We could call it an opportunity. But Yun went too far to call it blessing.”

Choi, however, agreed with Yun’s assessment that Korea made a timely decision to join the AIIB.

“If the government made its decision too early, then it would have faced tremendous pressure from Washington to withdraw it,” said the former professor of the Korea National Diplomatic Academy.

He added Korea managed to avoid such pressure because it opted to join the bank after other U.S. allies including Britain and France announced their applications for membership.

The Blue House appears to have viewed his comment as going too far.

“It would have been better if Yun had used more proper wording at a public venue,” said a Blue House official who asked for anonymity. “But we don’t need to denigrate ourselves by saying we are stuck between China and the U.S.”