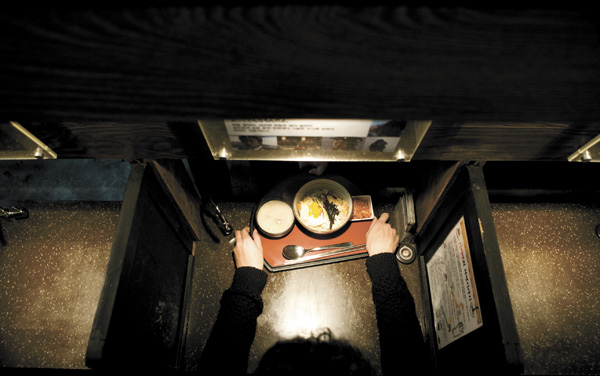 “In the 1980s, fighting for democracy and justice, college students believed that their friends were their comrades,” said Lee Woon-taek, a sociology professor at Keimyung University. “But now, students don’t even share their notebooks with each other because of this sense of rivalry.”

According to a survey conducted by Joongang Ilbo that questioned about 30 college students, most responded that due to the stress from finding a job, they preferred being with strangers rather than with their friends, and sometimes they liked to just be completely alone.

They are what are known here nowadays as Homo Solitarius, or solitary human beings.

Students often turn to school clubs at local colleges to improve their chances for finding a job. Organizations concentrated on business management and leadership, in particular, have high competition rates for admission.

“I didn’t talk with other club members,” said Ms. Ju, who was formerly part of a local leadership club. “I don’t currently keep in touch with anyone from the club, but I’m satisfied that I have that experience to add on my resume.”

College students who choose to dine out alone, referred to as honbapjok, are seen as another side effect of the desperate employment situation. In areas around universities, restaurants serving meals for loners have grown in popularity. Choi Hyun-jeong, 27, who is currently unemployed, often goes to a Japanese noodle restaurant in Shinchon, northern Seoul, because she doesn’t want to waste time eating with friends.

“Despite feeling lonely, I have to budget my time in order to get a job,” she said.

A number of mobile applications have also been developed to cater to people like Choi.

Lee Hyeon-jae, a senior at Seoul National University (SNU), created the application Doori Doobab, for instance, which connects students who wish to dine out with others.

After polling 225 SNU students, he said he decided to create the app after 63 percent said they wouldn’t be averse to eating with someone they’d never met.

In a separate survey conducted by Park Woong-ki, a professor of journalism, public relations and advertising at Soongsil University, 500 college students answered that they spent 88 minutes on average on social networking services daily - more than the 76 minutes Koreans on average spend on the Internet via their smartphones, according to data by the Korea Communication Commission.

“People in their 20s are using SNS for gratification rather than forming new relationships with others,” Park said.

The recent popularity of mobile life-simulation games also demonstrates an aspect of loneness pervasive among the young generation. These kinds of games require a user to control a character in a virtual reality.

Still, such behaviors concern some experts, who contend that long periods of loneliness are not conducive for finding a job or traversing the work force.

“Students who prefer to be alone and don’t have friends could end up having problems socializing with their coworkers later when they’re employed, which is necessary at companies,” said Yang Jung-ho, an education professor at Sungkyunkwan University.