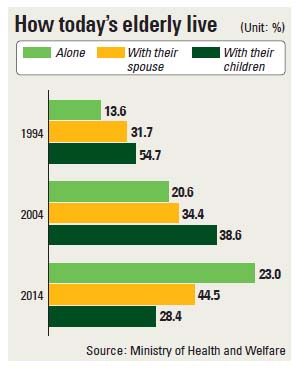 Ms. Heo, 85, has lived alone in Seongnam, Gyeonggi, since her husband passed away 20 years ago.

She currently resides in a small apartment with a bedroom, a kitchen and a bathroom, for which she put down a 5 million won ($4,500) deposit and pays 200,000 won each month.

She has a son and a daughter, though she only talks to them on the phone once or twice a month and meets with them every two to three months.

She has about 20 million won in savings that her husband left her, she said, as well as her deposit on her apartment.

She receives about 500,000 won every month, most of which comes from her children and her pension, though there isn’t usually much left after she pays her bills and the rent.

Heo must also buy medicine for high blood pressure and arthritis, so she can’t help but spend what she has in the bank. “My children are also struggling to make a living and feed their families, so it’s more pleasant for me to live alone,” she said. “Though I often think I want to stop living because I feel lonely when I’m alone.”

According to a study released Tuesday by the Ministry of Health and Welfare on senior citizens, more than two-thirds of the country’s elderly - those 65 or older - like Ms. Heo, lived alone or with their spouse in 2014.

Last year, when the Korea Institute for Health and Social Affairs (Kihasa) interviewed 10,452 people aged 65 or older nationwide, 44.5 percent answered that they live with an elderly spouse, and 23 percent of respondents were living alone.

The number of elderly living alone has seen a huge increase, up from 13.6 percent in 1994, and those who are living with their children saw a dramatic decrease, from 54.7 percent in 1994 to 28.4 percent last year.

“It was common for old people to live with their children, but now it’s become common to live with just a spouse or alone,” said Jeong Gyeong-hee, a senior researcher at Kihasa.

Physical and mental health was another issue. The study showed that 82.9 percent suffered from chronic illnesses such as high blood pressure or diabetes, with one person having 2.6 chronic illnesses on average. It also showed that 33.1 percent had symptoms of depression and 31.5 had weakened cognitive functions.

Their lifestyle was also monotonous, with 82.4 percent of respondents answering that they spent most of their time watching television. They also said they spent their spare time walking, reading, gardening or playing Korean card games.

“Because a welfare policy for the elderly was set up too late, those who are now senior citizens could not prepare economically and socially,” said Choi Seong-jae, an honorary professor at Seoul National University. “What we urgently need now are plans for the old and those after them.”