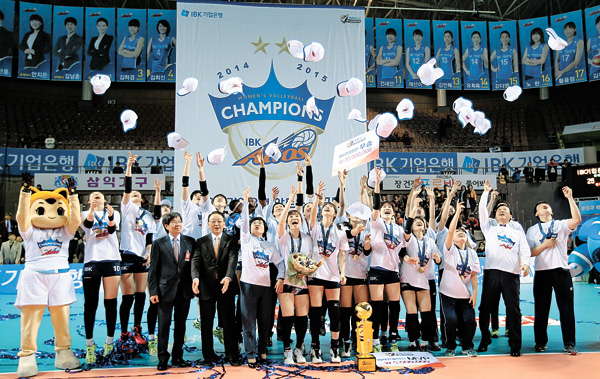 Hwaseong IBK Altos players often say they would rather play every day, because practice is much harder and more challenging than a game.

Altos coach Lee Jung-chul is known for his rigorous approach. Some fans call him “Gargamel,” a main villain from the “Smurfs” because he often pushes players and talks tough during timeouts.

They became the first women’s volleyball team to win three games in a row in the finals.

“Now I can drink a glass of soju,” Lee said after the game. “I think I didn’t do much, but we had good concentration at the right time. Our players have really grown a lot.”

“We had some difficulties with the injury of Destinee Hooker, but overcoming those difficulties and winning the championship makes it more valuable,” he said.

For the celebration, the 55-year-old coach was stamped on by players in a scene reminiscent of what happened last week when Chuncheon Woori Bank Hansae won the Women’s Korean Basketball League (WKBL) championship.

“It’s a little strange, because this season I wasn’t really hard on players,” Lee said with a laugh. “It felt like I was receiving a massage.”

The championship series MVP was setter Kim Sa-nee, who returned from the Azerbaijan league. Lee said she deserved the award, especially complimenting her back toss.

Lee said Kim used to get teary during his intense training sessions and their relationship grew cold, but those days are over. “When Sa-nee joined the team, she was worried about whether she could play all those league games,” he said. “But she worked hard to prepare herself.”

The former Heungkuk Life Pink Spiders coach said Kim Hee-jin and Park Jeong-ah showed great improvement both mentally and with their volleyball skills. But it was attacker Chae Seon-ah who improved the most, he said, hinting her position could change.

“I think she can play the libero position the next two or three years,” he said. “I told her to consider it since it’s a special position where you can have a long career.”

The coach said he has a love-hate relationship with leading scorer Destinee Hooker, who averaged 27 points in the three championship series victories. However, he acknowledged the Altos would not have won the championship without her.

“When Destinee is mad, she doesn’t even talk with her translator,” he said. “But we have soothed her and come this far. She was like a wild horse.”

As coach of the V-League champions, Lee has emerged as a top candidate to lead the Korean national team at the 2016 Olympics in Rio de Janeiro. Lee coached the national team in 2007, but failed to reach the 2008 Beijing Olympics.

In the midst of celebrating the championship, Lee was saddened by the absence of his father, who died last May. But because of his family, who understands why he is home only on weekends, and players, who understand him despite rigorous training and harsh words, the Altos coach says he is a lucky man.

“From now on, I should be more friendly and soft to the players,” he said. “But I think the rigorous training should go on.”