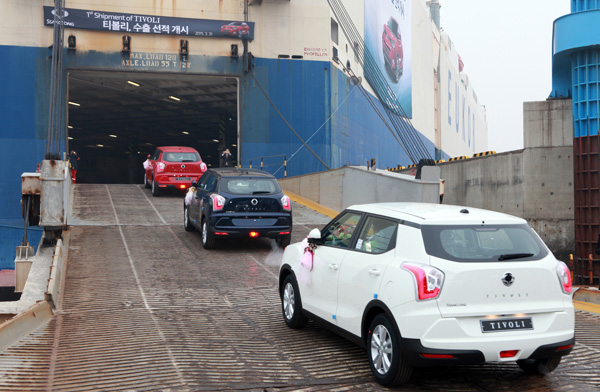 Prices of private services rose 1.9 percent year-on-year, but declines in the cost of natural gas (14 percent), agricultural and livestock products (0.8 percent) and oil (21.4 percent) dragged down the overall inflation rate.

Many are concerned the decline in consumer prices may be an indication the Korean economy could be entering a period of deflation.

However, analysts believe the local economy continues to display weak but definite signs of recovery as core inflation remained above 2 percent, registering 2.1 percent in March.

Core inflation excludes oil and agricultural produce, which tend to be particularly volatile. It is often used as an indicator of an economy’s fundamental strength. 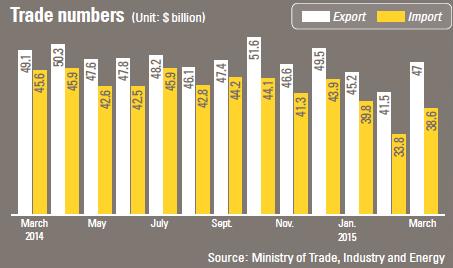 “Despite the longstanding low inflation rate and sluggish domestic economy, it is not correct to say Korea is heading toward deflation because the core price is still growing more than 2 percent, which is still a weak sign of recovery,” said Lee Joon-hyup, head of the economic analysis department at Hyundai Research Institute. “As of now, it is more likely correct to say the main culprit of the inflation slowdown is the low price of oil.

“The positive impact of lower oil costs usually comes six months after [the price starts dropping], which would be the latter half of the year at earliest. Relatively inexpensive oil will eventually result in lower prices for products and allow households to spend more, accelerating the recovery of the domestic economy.”

Meanwhile, exports and imports both fell in March, yet there was a trade surplus for the 38th consecutive month thanks to sharply reduced imports. It was also the third straight month the dollar value of Korean exports dropped.

According to the Ministry of Trade, Industry and Energy, March exports were valued at $46.9 billion, down 4.2 percent year-on-year, while imports were $38.6 billion, down 15.3 percent. The result was a trade surplus of $8.4 billion.

Cheaper petrochemical and refinery exports were the biggest reasons why the overall value of exports slipped, the Trade Ministry said.

Offshore plant exports grew 13.6 percent to $3.7 billion, while semiconductor exports were up 3.4 percent to $5.4 billion. 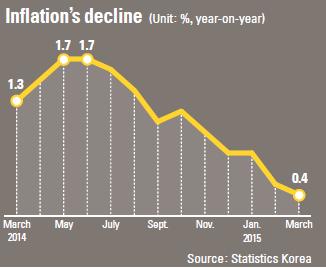 Meanwhile, Korean steel products shrank 4.3 percent to $2.7 billion due to price reductions in response to excess production by China. Exports of automobiles also dropped 6.7 percent to $4.3 billion, largely due to reduced demand in Russia.

“Despite continuous export declines, I don’t think this is a sign of trouble since both export volume and our companies’ profitability are improving,” said Kwon Pyung-oh, deputy minister for international trade and investment. “In particular, export volumes of petrochemical and other oil products have increased, and low oil prices have strengthened the Korean won and enhanced corporate profitability.”

Slumping imports are seen as an indication of the persistent sluggishness of the domestic economy.

However, the Trade Ministry says imports of consumer products actually increased 9.4 percent. The ministry explained that overall imports declined because of reduced shipments of major raw materials like crude oil and steel panels.

According to the ministry, international prices of Dubai crude oil plunged to $54.70 per barrel in March, down from $104.40 a year earlier.

Bank of Korea Governor Lee Ju-yeol recently said he is worried about the nation’s key economic indicators like consumer price and trade indices and will take that into consideration when making monetary policy decisions.

The market took his remark as a sign the central bank might further cut its already record low benchmark interest rate when its monetary policy committee next meets in May.