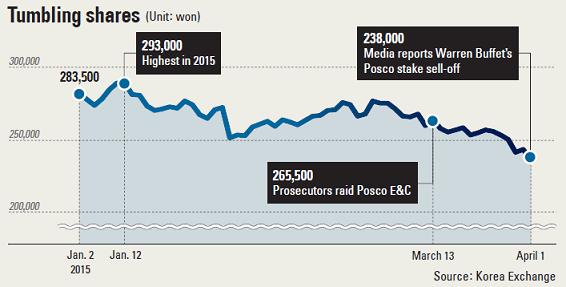 Shares of the nation’s leading steelmaker Posco tumbled Wednesday to its lowest price in a year after the local media reported that Berkshire Hathaway Inc., led by superstar American investor Warren Buffett, had sold its entire stake in the company.

Posco fell 2.66 percent to close at 238,000 won ($216) per share on the Seoul stock market, extending its slide to 14 percent for the first quarter after local economic daily Maeil Business Newspaper reported that Berkshire Hathaway sold its 4.5 percent stake in the steelmaker in the second quarter of last year. Maeil cited a study by financial data provider FactSet.

Neither company confirmed the sale.

Berkshire Hathaway purchased Posco shares in 2007 when the price was about 150,000 won per share, meaning that it may have made a profit of at least 86 percent, according to the financial industry. Posco shares traded in a range of 280,000 won to 320,000 won during the second quarter of last year.

Considering that Buffet likes long-term investments in companies that have big potential to grow, there are worries that the U.S. investor might have thought that Posco is facing a gloomy future.

“It looks like the news about Buffett impacted the stock market as he is one of the most famous investors in the world,” Choi Moon-sun, an analyst of Korea Investment & Securities, told the Korea JoongAng Daily. “But it is hard to see that the Buffet news was the only reason for the sharp drop. Posco shares have been consistently falling in the past few weeks.”

But the company’s net profit has dropped for four straight years, from 3.7 trillion won in 2011 to 500 billion won last year on a consolidated basis.

The company said it is aiming for annual operating profits of 8.5 trillion won by 2016, but there are views that the goal is too ambitious for a company in a poor business climate and difficult political circumstances.

Posco is currently being investigated by the government for an alleged slush fund of 10.7 billion won in Vietnam that was suspected to have been parked there by construction arm Posco Engineering & Construction.

“It’s hard to imagine the situation for Posco could get worse, at least in its business,” said more optimistic analyst Bang Min-jin of Eugene Investment & Securities. “The slump in the steel industry caused by several factors, including an oversupply of Chinese products since 2007, will be ending soon. It’s too early to consider selling Posco shares for now.”