Public starts to warm up to ‘Real Men’ star

Public starts to warm up to ‘Real Men’ star 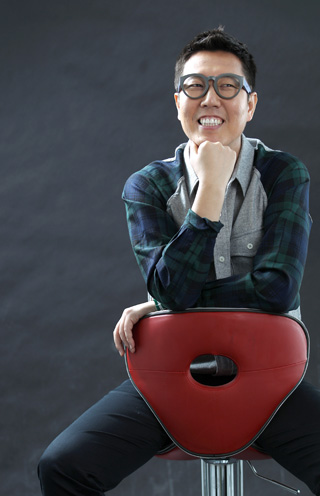 Comedian Kim Young-cheol, who debuted 17 years ago, has been consistent about one thing: exaggerating his words, actions and impersonations of celebrities such as pop star BoA or veteran singer Ha Chun-hwa.

Some find his impersonations funny, but at the same time there are others who fail to warm to him. After all, Kim is not the most handsome guy in the world. For this reason, even though he is someone who has given his all in everything he does, Kim certainly has his share of haters.

But his recent gigs on MCB’s military-themed reality show “Real Men” and successful long-running entertainment show “Infinite Challenge” have changed his image. In “Real Man” in particular, Kim is killing two birds with one stone - being the funny guy in the crowd but also showing his somewhat serious, sincere side by giving 100 percent during the training program.

In a recent interview with Ilgan Sports, an affiliate of Korea JoongAng Daily, Kim spoke nonstop in his loud, high-pitched voice, just like on TV.

“I have been criticized all my life for being chatty and loud,” he said. “It was like that when I was in high school, and also when I went into the military.”

Kim said he hasn’t changed a bit but that people’s responses have changed. “I have ranked as the No. 1. searchword on web portals, and there hasn’t been a time in my career when there were so many news articles on me,” he said excitedly.

Q. How do you feel about your sudden, newfound popularity?

A. It feels strange and unreal. I’m doing things that I have been doing all throughout my comedy career, but I’m seeing a sudden surge of news articles on me, and those articles are making the top news on web portals. I heard everyone has an “up” in life at least once, and also a year when things just work out. I guess, for me this year is the one.

In particular, people seem to like seeing you on “Real Men.”

Yes. It’s actually my first time having a regular gig on a weekend entertainment show. It’s also my first time participating in a reality show. I’m doing what I usually do, but I think it’s just different doing it in a studio and doing it outside - at a military camp in this case. I have been chatty and overdoing things all my life - in high school and when I went into the military. That’s why I was always the one scolded the most by instructors.

It’s hilarious how you are scolded mostly because your teeth are showing and because you can’t stop laughing.

Yes. I can’t really [physically] close my mouth anyway. So it was funny when I was told not to show my teeth. I couldn’t stop laughing. In fact, this is the first entertainment show that I’m in where I’m not supposed to laugh. If I try, I can only close my mouth for 10 seconds, but after that it opens, just naturally. It’s because of my oral structure. I can’t help it.

Some people say your comedy style, which is mostly impersonation, has a limit and that people tire of it easily.

That is one of the reasons why I chose “Real Men,” because it’s not scripted; we just show what we’ve got in a given situation. I thought I could show a different side of me. Also, people are bound to have their preferences when it comes to comedy. For instance, when I do my impersonation of Ha, some people say please stop but some people find it hilarious. As long as people know I’m trying and working hard, that’s fine with me.