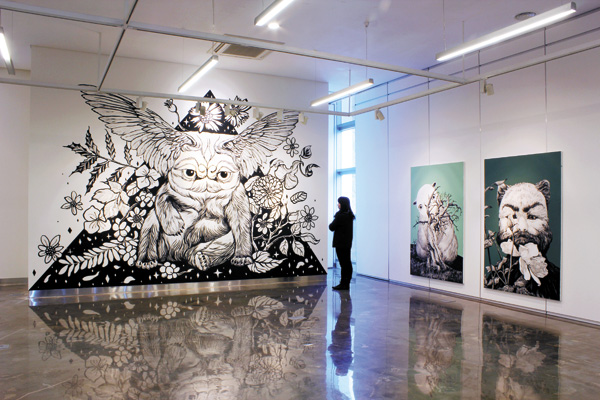 Kolon Group operates four Space K galleries - in Seoul, Daegu, Gwangju, and Gwacheon in Gyeonggi - in an effort to support artists as well as help familiarize the public with modern art in Korea. Above is artist Lee Jae-ho’s painting “Monsters” in Space K Daegu. Provided by Space K

“There’s a saying that good deeds get written in sand while evil deeds get engraved on rock. It means that good deeds are easily forgotten. I want to engrave the good deeds of love and sharing by the people in this society, not on sand but on rock.”

At the annual ceremony, the company’s nonprofit organization recognizes citizens who quietly carry out good deeds in society.

Lee took part in helping Korea stand up as an industrial powerhouse through his group, making it the first company in the nation to build a nylon plant and manufacture polyester.

But other than being known as a textile guru, Lee was also dubbed “a man of good deeds.”

The list of the group’s corporate social responsibility projects focusing on citizens is endless and even penetrates its art patronage activities. One of the company’s major sponsorship ventures is its four “Space K” galleries located in Seoul, Daegu, Gwangju, and Gwacheon in Gyeonggi. 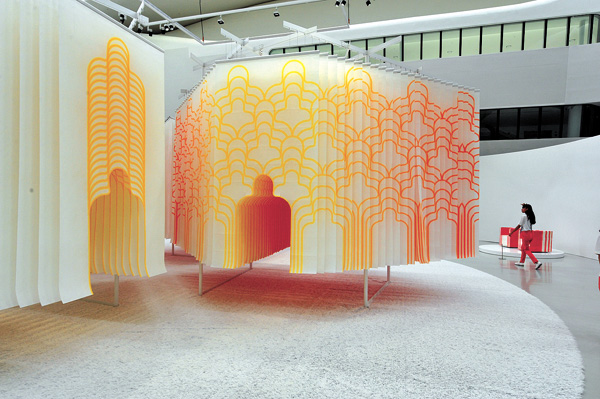 Kolon’s global art project, “Inspiring Journey,” won the Red Dot Best of the Best award in 2014. The photograph above is the project’s main piece, “Habitats.”

“The spaces have been established in order to support culture and arts as well as share it with local residents,” said Hwang In-sung, an assistant manager at Space K.

“In 2011, Space K Gwacheon, which is located on the first floor of Kolon’s headquarters, opened first. Three more followed across the country in subsequent months.”

The spaces do not exhibit art by esteemed artists such as Andy Warhol or Roy Lichtenstein. Instead, they attempt to demonstrate the flow of modern art with multiple perspectives through four different exhibitions within each space. 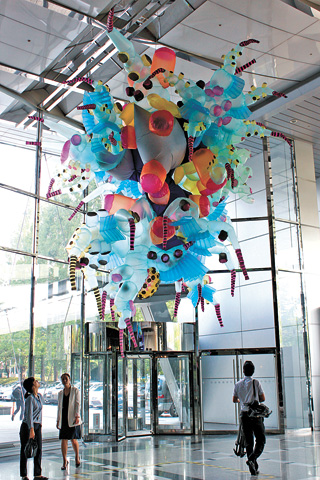 Each space also has its own hands-on activities for local residents to help them better understand modern art in a more entertaining and easy way.

Currently, an art drawing book class for children is ongoing in all four Space K galleries. After pre-booking through the gallery website (www.spacek.co.kr), the materials needed for the activity are prepared.

“This art book has been produced by Space K to stimulate the imagination while enhancing the thinking power of children,” explained an official from Space K.

“Seven artworks that have been exhibited at Space K were selected and turned into basic sketches so that children can freely add colors or other drawings in the art book. We hope children treat the exhibition spaces as their playgrounds and the art works as their friends so that they can learn naturally how to enjoy the art.”

The official added that it is crucial for parents not to help their children or guide them into ensuring the drawing resembles the original art.

“We sometimes see parents scolding their children to color the paintings properly by comparing them with the original artwork,” said the official from the Space K in Gwacheon. “But that’s wrong. It’s important to encourage children to use their creativity and originality to create their own piece.”

She added, “We also encourage parents to talk about the work with the children when they finish with their artwork.”

The activities are provided free of charge.

When Space K selects artists, it makes sure their art carries some kind of significance, socially or artistically.

“Landmarking,” an exhibition by four artists, is currently being held at Space K Gwacheon.

Each participant came up with a new perspective while looking at various places in the city, including public spaces that people dislike but are indispensable.

Artist Keum Hye-won picked garbage dumps, which she believes are necessary even though people frown at their existence. By photographing different ways refuse is discarded, she attempts to highlight the importance of this part of the public space that people tend to want to ignore. She wants to prove that “in order for people to live a pleasant life, there needs to be a sacrifice in another corner of the city,” according to Space K Gwacheon. 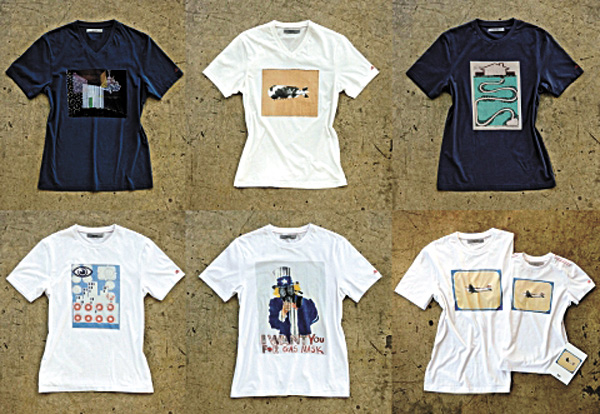 Artist Kim Ju-ri worked with sand and made a miniature residential house reminiscent of those that were mass produced in Korea in the 1970s and ’80s. She allowed water to penetrate into the sand so that it gradually collapsed.

According to Space K Gwacheon, the artist wants people to think about the meaning of housing amid the tendency to reconstruct and rebuild.

Artist Kim Hong-sik suggests that public spaces affect how modern people acquire knowledge and can sometimes make mistakes during the process, while artist Park Jin-ah captured various scenes in an airport, a large public space where people are obliged to follow orders and rules.

Last year, Space K Gwacheon also held an exhibition that was a part of the group’s campaign to introduce industrial materials that people are not familiar with as they only ever see a completed product.

“Inspiring Journey,” a similar exhibition that suggests how various industrial materials exist within our everyday life, was also exhibited as a global project. Several of the pieces from this show won the Red Dot Best of the Best award in 2014.

The exhibition was held in the Dongdaemun Design Plaza as well as in Beijing last year, attracting 45,000 visitors.

The group says the existence of Space K is more than just to provide opportunities for local residents to enjoy art as well as support rising artists.

It stressed that one of the main objectives of Space K is also to contribute to society through the arts. Towards the end of every year, artists who have participated in exhibiting their work at Space K hold a charity show and donate any profits made from the sale of the work.

The total amount was donated to the Prume Foundation to help establish the country’s very first rehabilitation hospital for children.

“This summer, we are planning to carry out a social responsibility project for children with development disabilities together with artist Ahn Yoon-mo,” said Hwang. “We’ve also been active in collaborating with other organizations to support artists. We’ve supported an art magazine called Art in Culture’s incubating program for rising artists and also collaborated with Louis Vuitton Korea and Art and Community Network last March to exhibit an art patronage project, ‘Artisans.’”

As a conglomerate that has been quick to notice social issues and carry out corporate social responsibility programs from early on, the group’s sponsorship program started in 1998.

The program was carried out for 11 years and was then developed into “Kolon Summer Culture Festival” with the addition of art exhibitions in the center from 2009.

Noticing a great response from the public, with 8,000 visitors during a two-month exhibition in the first year, Kolon decided to specialize in art exhibitions for its patronage program by opening up Space K in 2011.

In Space K Daegu, a group exhibition by four artists, “The Great Trivia,” will run from Thursday until May 27. Admission is open to all for free.

The opening hours are between 10 a.m. to 6 p.m. and all spaces are closed on Sundays. For more information, visit www.spacek.co.kr.