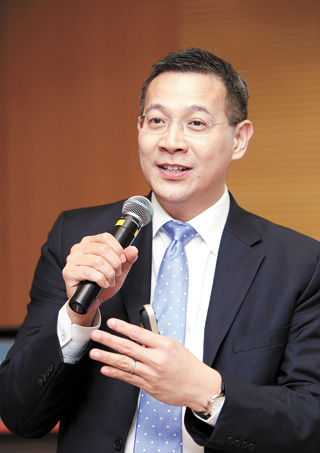 The Internet of Things (IoT) is often understood as revolving around home appliances or personal gadgets, but Cisco Systems seeks to expand the concept to include cities and factories.

Cisco is drawing upon its broad networking experience to integrate traditionally separate segments.

Cisco emphasized its business focus in its investment plan.

“We are looking at investing in emerging markets with huge potential, such as Big Data and Internet of Things,” said Idemoto

Cisco Systems CEO John Chambers said that the IoT - with products connected to parking lots or household goods - could be a $19 trillion opportunity.

The company demonstrated IoT platforms for a noodle company on the main floor of COEX.

When a monitoring system for an assembly line connected through the company’s integrated network system stopped, the monitor immediately noted the glitch.

The monitors can display information at headquarters and supply chains in different countries.

“A malfunction of the factory system would appear later if there were no integrated system,” said Kim Su-man, a director at Cisco.

With regard to parking lots, embedded sensors in the lot’s cameras could detect whether cars had disabled or VIP passengers.

The system also detected when an unregistered car attempted to park.

Highlights also included a drone that could measure a diverse range of environmental and chemical conditions, such as radioactivity or fine particle concentration in the air.

“Now, conventional measurements are fixed at certain places,” a presenter of the drone booth said. “But with the drone, people can send it wherever they want and detect different conditions by altering the sensors attached to it.”

The drone is a collaboration between Cisco, Hanyang University and Konkuk University.