America is on same page on history issues: Korean envoy

America is on same page on history issues: Korean envoy 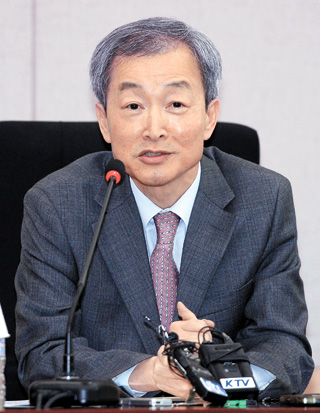 Korean Ambassador to the United States Ahn Ho-young emphasized that Washington is in line with Seoul in its stance on outstanding historical issues between Korea and Japan.

He was also hopeful that Prime Minister Shinzo Abe’s upcoming speech to the U.S. Congress would serve as an opportunity for the Japanese leader to face up to the expectations of international society.

“Both the government in Washington and its civilians have a very clear understanding of the historical issues between Korea and Japan,” Ahn said. “I can say this with confidence after analyzing the situation there.”

Ahn spoke Thursday at a press conference at the Ministry of Foreign Affairs in central Seoul, where he touched upon bilateral relations between South Korea and the United States, historical tensions with Tokyo and the deployment of an American anti-ballistic missile system.

He was in Korea to attend an annual meeting with the leaders of Korea’s diplomatic missions worldwide.

“The [Barack Obama] administration, the U.S. Congress, academics and the media all have strong sympathy for this issue,” he continued.

Tokyo’s refusal to officially apologize for forcibly recruiting thousands of young women - mostly Koreans - into military brothels during World War II has long been a key point of contention between Seoul and Tokyo.

“Last year, when President Obama visited Korea, he said ... that the past has to be recognized honestly and fairly, and that the ‘comfort women’ issue was terrible and shocking,” Ahn said in reference to Japan’s wartime victims, who are euphemistically known as comfort women.

“Since then, it has been difficult to find differing commentary [on the issue] by high-ranking and working-level U.S. officials than that used by President Obama.”

He noted Obama’s visit to Seoul in April 2014, when the U.S. president said in a joint press conference with President Park Geun-hye that “any of us who look back on the history of what happened to the comfort women here in South Korea … have to recognize that this was a terrible, egregious violation of human rights.”

He added that the violations against those women were “shocking.”

In regard to Abe’s speech next month, which he is slated to deliver at a joint session of the U.S. Congress - a first for a Japanese prime minister - Ahn said, “As a leader with a valuable opportunity at a very valuable time period, I look forward to him meeting the expectations of the world’s citizens. The U.S. is also trying hard [for this to happen]. Because I am observing the situation from that side, I can say this with confidence.”

He additionally addressed the concern in Seoul regarding the deployment of the U.S.-led Terminal High Altitude Area Defense (Thaad) system, emphasizing that, “We have not requested nor discussed [the issue] with the U.S. or responsible authorities.”

The issue has been a controversial subject, and Russia and China continue to be wary of the deployment of the Thaad battery on the Peninsula.

Ahn, who previously served as the first vice minister of foreign affairs and trade, was appointed as the top Korean diplomat to the United States in May 2013. He received his bachelor’s degree in political science from Seoul National University and his master’s from the School of Foreign Service at Georgetown University.

He is recognized, in particular, for acting as a Korean ambassador during the 2010 Group of 20 summit, which was hosted in Seoul.

Q. What are the chances that Prime Minister Abe will make any significant remarks before Congress in his upcoming trip to Washington?

A. The basis of U.S. diplomatic policy is that, whatever the country, the starting point of national interest is diplomacy.

What is the United States’ national interest, since it can’t demonstrate its leadership in the international community alone?

Its alliances with its closest countries are most important, such as NATO, Korea, Australia and Japan. It is likely that when the leader of one of its most important partner countries comes to Congress and requests to make a speech, it will make a decision in line with its national interest.

On whether [Abe] will make any significant remarks in his speech, that question should be directed to Prime Minister Abe himself.

However, speaking in terms of common sense, there is only one way to solve historical issues: History has to be accepted as is. It doesn’t matter if you don’t like it because it won’t go away.

This year marks the 70th anniversary of the end of World War II. Will the United States forge a forward-looking policy with Japan?

Seeing from the U.S. point of view in terms of national interest, NATO, and its relationship with Japan, Australia and Japan are important.

As it continues to put effort toward the economy as well as international cooperation, the 70th anniversary is not going to make a huge difference. This is not just about Japan, but Korea, Australia as well as NATO.

Korea recently decided to join the Asian Infrastructure Investment Bank (AIIB), which the United States was initially opposed to. Can you describe how we were able to persuade Washington?

It is too early to speak of a turning point for the United States. There seemed to be some common ground in the perception of the international view of the AIIB issue, such as the need for more investment in infrastructure, and a common consensus that there needed to be an investment mechanism that can play a multi-banking role. So there was the positive perception that AIIB could fulfill that role.

There’s also a lot of interest in the Thaad issue, but there seem to be contradicting remarks from U.S. officials in this regard. What do you think of this sort of behavior from Washington?

Gen. Martin Dempsey, the U.S. chairman of the Joint Chiefs of Staff, visited Korea and met with his South Korean counterpart [Gen. Choi Yun-hee], and in terms of what seems contradictory, rather, there has been a very uniform position.

But since there are many personnel who discuss defense issues, it seems like there could have been a gap in their remarks. However, U.S. and Korean authorities responsible for the issue have not requested discussion on [Thaad], and that has been maintained throughout. When the time is right … it will be dealt with accordingly.