How the U.S. commander reacts

How the U.S. commander reacts 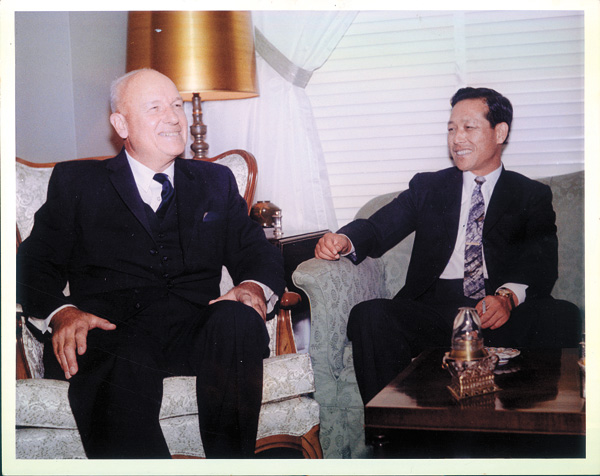 Kim Jong-pil, then-head of the Korean Central Intelligence Agency, chats with former U.S. Forces Korea Commander Carter Magruder during his visit to the former general’s house in Virginia on Oct. 28, 1962. Kim recalled the veteran military official calling him a young Korean patriot during the meeting. Provided by Kim Jong-pil

By nightfall on May 18, 1961, I became convinced that our revolution had succeeded. As I felt more at ease, an American military official with the rank of captain paid me a visit. He was sent by Carter Magruder, the commander of the powerful U.S. Forces Korea.

He relayed the commander’s wish that I come to see him the next morning. He wanted me to come in civilian dress, not military uniform. I interpreted that request - or demand - as his gesture of respect. He would treat me as a revolutionary leader, not a mere lieutenant colonel.

On the day of our revolution, May 16, I was reinstated in the military as a lieutenant colonel three months after I was forcibly discharged for demanding the dismissals of the military leadership.

Sending the captain to see me was a turnaround from Magruder’s initial response to our May 16 actions. He initially called for the mobilization of forces to quell our revolution.

The next morning I headed to the headquarters of the U.S. forces in Yongsan, central Seoul, in a suit. I was on my way for the first one-on-one meeting with the powerful U.S. general on behalf of the revolutionary forces.

In retrospect, the U.S. Forces Korea was the most formidable and threatening presence to the revolutionary forces. It had 56,000 U.S. soldiers under its command stationed in Korea and its commander, Magruder, had full authority of command over the Korean military. It also had far-reaching influence in the government.

Before the revolution, I studied cases of how the U.S. military responded to military coups or civil wars in a foreign country in which it was stationed. There was one underlying commonality. The U.S. forces never intervened in domestic affairs of their allies as long as it did not affect or undermine its operational capability. As long as they were not affected, it never tried to meddle.

Though Magruder declared the coup invalid on the air through the American Forces Network radio station on May 16, I was not worried at all. I knew what he said was nothing more than an expression of dissatisfaction. His disapproval might have had some leverage, but never enough to change the course set by people who put their lives on the line for the revolution.

At 10 a.m., I entered his office. There was a Korean translator, Lt. Col. Han Sang-kook, standing by. Commander Magruder was sitting next to another four-star general, Guy Meloy, who was to succeed him as the U.S. Forces Korea commander.

As I took my seat, Magruder stood up and paced his office like an angry lion. He shouted, “You drew in military forces that are under my command. You need to return those forces to their bases immediately.”

I kept my composure and responded, “Did you ask me to come here just to threaten me?”

Magruder insisted on getting the revolutionary forces back to their bases and claimed using them for a coup without his approval was in violation of a military agreement between Seoul and Washington.

“We just carried out a revolution,” I snapped back. “Who in the world reports their revolutionary plan in advance to someone out of the group? There has been no such revolution in history.”

The tension in the room was overwhelming. Magruder shouted again, saying that he would not tolerate the breach of his authority.

I shouted back that I had no reason to talk to him if he did not recognize the legitimacy of the revolution.

I stood up to leave. Meloy stopped me, saying we still needed to talk.

I returned to my seat and said, “If we are to discuss anything seriously, we need to do it with composure, not with tension.”

At that point Magruder smiled. He said he intentionally stoked tensions because he wanted to test my mettle. He was a veteran soldier who was 26 years older than me.

As he returned to his seat, the commander asked me who we [the revolutionary forces] were and why we carried out the coup.

I replied, “I had a taste of the U.S. from my days at Fort Benning,” a U.S. military outpost in Georgia. I was in Fort Benning as a 25-year-old captain in the summer of 1951.

“At Fort Benning,” I continued, “I learned advanced human resources management as well as group and material management. After I returned from the U.S., I saw how far behind Korea was. I was preoccupied with the question of how we could transform this county. Lawmakers only cared about having their share in power and money and engaged in partisan fighting. I wanted to build a country whose people don’t have to worry about making ends meet, just like yours. One that is run on a democratic order.”

Magruder was also curious about the revolutionary government’s economic policy guidelines. It was a matter I had put a lot of thought into.

“First of all, we will drive out hunger. We will draw in foreign investment and set up factories using the foreign capital. We also need to learn advanced labor skills. After we achieve economic industrialization through which people will be fed, then we will move on to achieve democracy. I wish for the full support of the U.S.”

I also laid out my plan for normalizing diplomatic relations with Japan.

“To bring in capital and industrial technology, I intend to forge ties with Japan. If we join hands with Japan, it will enhance the U.S.’s strategic capability in the Pacific.”

My answers were without hesitation and full of confidence.

Magruder seemed struck by my answers and our talk ended up lasting more than three hours. I found he wanted his authority to command the Korean military to remain intact. He had no intention to deny the legitimacy of our revolution.

I made it clear to him we would never undermine his commanding authority, but also pleaded with him for military manpower to protect the revolutionary government. At his request, we met again on May 20 and 25.

I reported the details of our talks every time to Park Chung Hee. Through my talks with the American general, we formed the framework of a new order in Seoul-Washington relations following the May 16 revolution.

The U.S. Forces Korea recognized our revolution and promised to give its support. The revolutionary government agreed to return the 6th Corps artillery unit and Marines 1st brigade to their bases.

On May 23, Park had his first meeting with Magruder. Three days later, the two announced a joint statement affirming ties between the two governments.