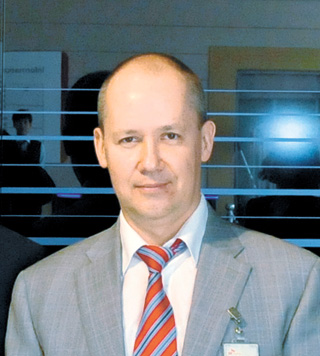 The director of the Belarus Hi-Tech Park envisions that the information center South Korea launched last year in Minsk will evolve into a venue that will ultimately support young innovators and entrepreneurs by providing them access to mentors and engineers.

“We will focus on helping young people - not just entrepreneurs - that have an idea, to make their idea a product,” Valery Tsepkalo, who heads the Belarus Hi-Tech Park, also known as Minsk’s Silicon Valley, said in an interview with the Korea JoongAng Daily on Tuesday at Lotte Hotel in central Seoul. “The basic aim that we have is to create an ecosystem where they will meet with the engineers that will be able to fulfill the idea.”

The Belarus-Korea Information Access Center was launched in September via an agreement with the National Information Society Agency under Korea’s Ministry of Science, ICT and Future Planning and the state-run Belarus Hi-Tech Park.

Science Minister Choi Yang-hee, the first Korean minister to visit the country, flew to Belarus to attend the opening ceremony of the center, considered part of Korea’s creative economy initiative to help foster innovation and entrepreneurship.

The information center is different from other similar centers that generally target older people to train them in modern technology, Tsepkalo pointed out, in that it draws in young talent.

Its objectives include formulating the idea, enabling protection under intellectual property rights, monetization and marketing.

“We’ll also give them the premises, offices to lease with a very good discount. They should pay, but not commercial price,” which he said will enable innovators to be “more responsible and have deadlines.”

Events next month for the information center include a global Facebook conference for European developers and a workshop connecting a group of visiting Korean businessmen and Hi-Tech companies.

Tsepkalo, the former first deputy foreign minister of Belarus and ambassador to the United States, said the technology park can help train young entrepreneurs, back small and medium-size businesses, and connect them to global partners, such as Korea, which is recognized for its information and communications technology sector.

Tsepkalo was on a five-day trip to Seoul that began Sunday and included meetings with Science Ministry officials and semiconductor producer SK Hynix, which opened an office last year in Minsk.

“Practically every country in the world would like to repeat the success of the Silicon Valley. I brought back to Belarus the idea of creating a kind of Silicon Valley, just with a smaller size,” he said. “I met many Belarusian engineers and software engineers that hold positions in U.S. companies in Silicon Valley. My idea was to create a project that would not force these people to go out of the country.”

“Software services revenue in 2014 was $650 million, 90 percent of which were exports,” he added, referring to the 137 companies registered at the complex.

Currently, 40 percent of the park’s exports go to North America and 43 percent to Europe. He added that about 5 to 7 percent of exports are to Asian countries, namely Singapore, Japan, Korea and Taiwan.

He noted several successful companies that went global over just the past year, like the gaming company Wargaming, known for its popular multiplayer online game World of Tanks, played by some 180 million people.

In terms of mobile apps, the instant messenger Viber has also become a global name - referred to in the media as The Skype Killer of Belarus - and was acquired by the Japanese company Rakuten last year.

“For a country like Belarus, having these global brands appear within only the last four years, with no brands in the IT sector, shows that we are on the right track,” Tsepkalo said.

He added that outsourcing, while safe, does not have high profitability - 20 percent would be a good profit. By contrast, profitability for product companies can be much higher, sometimes even more than 1,000 percent.

“But the problem is that some people get tired of one product and would like to move to another. Every time, you have to make a new product, otherwise you are dead.”

Tsepkalo brought up Nokia, started in Finland, as an example. “Nokia used to be the No. 1 mobile company, having in their best year in 2005 and 2006 about 50 to 60 percent of the world market. Now, it’s less than 1 percent. They couldn’t catch up with the trend when everybody was moving toward smartphones, and they lost.”

He continued, “I normally say to young entrepreneurs when they come to our business incubator with their start-up: ‘It’s not necessary to focus at this stage on a business model, on how you are planning to make money. Just focus on the product and focus on your market. .?.?. And the business model will come later.’

“It is an interesting trend in the modern economy that the most famous brands among customers and among the public - even despite not having a clear and understandable business model in terms of making money - are still valuable.

“In our case, you need only brains, and the only hardware you need is office equipment like a computer, and you can produce value,” he said. “We have companies that do not generate revenue but have value in the market.”