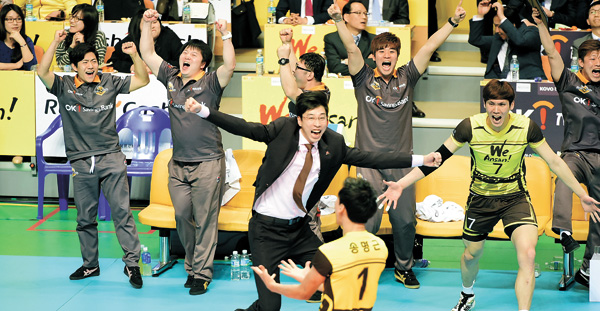 Before the Game 3 of the Korea professional volleyball league (V-League) championship series on Wednesday, Ansan OK Savings Bank Rush & Cash coach Kim Se-jin said it might seem like an April Fool’s joke if his team won.

Just like the phrase printed on their yellow uniforms, the Rush & Cash accomplished a miracle in only their second year in the V-League.

The Bluefangs have been in the V-League finals every year since the league was established in 2005. Yet the Rush & Cash lost just one set over the three championship series matches, and the team will take home 100 million won ($95,000) in prize money.

The Rush & Cash are the third team to win the V-League championship after Cheonan Hyundai Capital Skywalkers and the Bluefangs. The league has seven teams.

Kim, 44, is the youngest coach to win the V-League title after Shin Chi-yong of the Bluefangs and Kim Ho-chul, formerly of the Skywalkers.

“This victory came from heaven after gathering all the energy from our families and fans,” said Kim. “Players who overcame the last tough barrier and the support of fans made this miracle possible.”

The 22-year-old Song was named championship series MVP, the third Korean player in V-League history to receive the honor.

“Rush & Cash deserves to win,” said Bluefangs coach Shin. “I feel a little relieved that the trophy is going to a coach who came from this team.”

Kim, who was the championship series MVP in 2005, played nearly 20 years under Shin on the Bluefangs and national team. They were together for the Bluefangs’ 77-match winning streak in 2001-4. The former right attacker now has become the first man to win V-League championships as a player and coach.

“When you became a coach, it really adds a lot of pressure because you have to take care of everything from A to Z,” said Kim. “I don’t think we ended the Bluefangs’ dynasty. This is just a start for us.”

Despite his squad lacking experience, Kim, who worked as a TV commentator before joining the club, managed his young players like a big brother. He said the Rush & Cash didn’t have the power to match the Bluefangs at the beginning, but he told his players to focus on their positions, emphasizing the basics like serving and receiving.

“Young players will earn confidence with this win, but we have to make sure that confidence doesn’t become arrogance,” he said. “I’m sorry for the players, but I’ve already started my preparation for next season.”

As for the franchise, ownership’s efforts to boost volleyball have finally paid off. Apro Financial, which runs the nation’s largest private loan brand, Rush & Cash, tried to acquire the Dream Six volleyball club, but lost out to Woori Financial Group in 2013.

The company then founded its own club the following year, but often was opposed by existing teams, most of which were run by major financial companies. As a result, Rush & Cash was not able to finalize its roster until a week before its V-League debut.

After finishing its first season in sixth place, Rush & Cash owner Choi Yoon made a big investment by signing world-class player Robertlandy Simon Aties and promised incentives to the club.

“I really thank Choi for bringing me here even though I had no experience coaching,” said Kim.

The victory also means a lot to Ansan citizens, who have had a difficult time coping after the Sewol ferry accident last year that claimed the lives of scores of students from Danwon High School in the city.

For Game 3, 2,952 fans crowded into Sangnoksu Gymnasium, 200 more than capacity. After Rush & Cash won the championship, city officials say they are reviewing plans to build a bigger gymnasium.

“We played with the slogan ‘We Ansan’ on our uniforms and emphasized solace, but who can really provide consolation for their losses,” said Kim. “I think real consolation comes from playing our best and staying with our fans forever.”