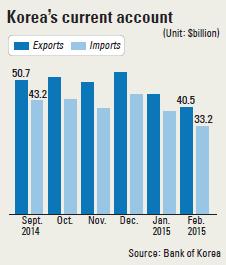 The nation’s current account surplus recorded its 36th straight month in February, posting $6.4 billion according to a Bank of Korea report Thursday.

But the second-longest streak since the 1980s added worries that it could be a bellwether for recession, with imports declining faster than exports.

The balance on goods, which tracks the imports and exports of commodities, posted a $7.3 billion surplus in February, expanding from January’s $6.69, the report said.

Petrochemical products saw the biggest drop, 42.8 percent in exports, mainly pulled down by the plunge in global oil prices. Exports of home appliances joined the decline, falling 22.2 percent. Automobiles were also down 17.8 percent.

Except the shipbuilding industry, which saw a 121 percent increase to $5.1 billion, and semiconductors, which grew 6.5 percent to $4.8 billion, other industrial sectors in 11 categories all slumped in exports.

Several double-digit decreases in the imports of raw materials, such as petrochemicals (54.9 percent) and crude oil (52.1 percent) were attributed as a major cause of the entire drop in imports.

The service account, which measures the country’s profits from service industries such as shipping and tourism, continued to show its chronic deficit, with $2.06 billion.

The BOK pointed out, however, that February’s deficit in the service account had reduced from $2.3 billion in January, mainly thanks to an improvement in the travel account, which compares the amount that foreign tourists spend in Korea to the spending of Korean travelers abroad.

Korea has suffered chronic deficits in the service account recently, reaching $8.2 billion in 2014, according to a report by the Korea International Trade Association in March.

Primary income account, which compares the incomes and investments of Koreans in foreign countries and those of foreigners in Korea, posted a surplus of $1.4 billion, sliding from January’s $2.9 billion.