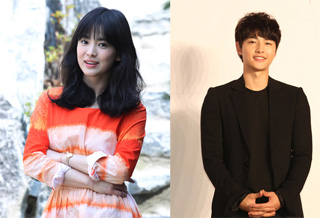 Actress Song Hye-kyo and actor Song Joong-ki are teaming up to play the lead characters in an upcoming drama named “The Sun’s Descendent.”

It is the first time for the actors to film a drama together as fictional lovers.

Shooting for the show will start at the end of April, and it will air in the second half of the year on KBS2.

Actress Song is currently acting in China as well as Korea. Most recently she starred in “The Crossing” (2014), a Chinese drama.

Actor Song is currently doing his military service. He will join the drama series as soon as he completes his mandatory service in early May.

Kim Ji-won, who played the role of Lee Min-ho’s fiancee in “The Heirs,” will also be participating in the new drama.

The setting of “The Sun’s Descendent” will be Uruk, Iraq. Actor Song will play a United Nations Peacekeeping soldier and actress Song will be a volunteer doctor. As they work together in extreme disaster sites, they learn to care for each other and in the process fall in love.

The drama will be filmed in domestic locations as well as overseas.

The writer is often called the queen of the romantic drama series.