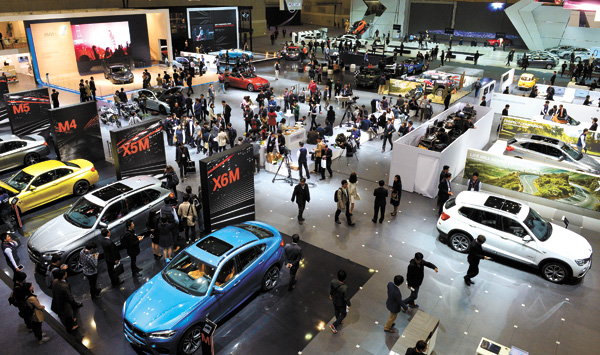 Overview of the Seoul Motor Show that opened on Thursday at Kintex, in Ilsan, northern Gyeonggi. The motor show is held every two years. [NEWSIS]

It is the 10th such biennial event, and 190 companies from around the world including 32 automakers and 131 part manufacturers are participating. It runs until April 12.

A total of 370 cars including 57 new models, 14 concept cars, as well as 40 environmentally friendly vehicles are displayed.

Most of the domestic automakers focused on introducing models they will soon start selling and visions for future design concepts, as well as marketing and sales strategies for the global market.

Hyundai Motor is unveiling its new urban crossover utility vehicle (CUV) concept two-door car Enduro, which is being developed under the project name HND-12. It was the first time it was shown anywhere. The name came from the English word “endurance,” which the company said refers to the “rock-solid” quality of the model.

A CUV is a vehicle that combines features of SUVs and sedans. The Peugeot 308 and Honda CR-V are examples. The car is expected to be smaller than the new Tucson SUV with an engine displacement of 1,600 cc or below. The Enduro in the show is built with a 2.0 T-GDi engine and a seven-speed double clutch transmission that shows off 260 horsepower and 36 kilogram-meters torque.

The Tucson is currently offered with 1.7-liter and 2.0-liter diesel engine models in the market. The Enduro is predicted to target consumers in their 20s and 30s, not only in Korea but also in the global market including Europe and North America. Starting from this year, the company will introduce 12 CUV models.

“We are pleased to introduce the company’s present and future,” said Hyundai Motor CEO Kim Choong-ho. “There were worries that the company would face some tough challenges caused by a weak yen and slumping economies in newly industrialized nations, but we are sure that we can improve our share of the global market. And since we have specific roadmaps for the future, you are sharing that future with us now.”

The company also wants to boost its SUV sales, particularly for the Tucson. It will hold “Tucson Day,” a design forum on April 11 to share the design identity for the SUV with foreign car designers. The second-generation model that the company started selling on March 10 is riding high in the domestic market since it received a total of 10,300 orders through March, meaning that an average of 570 units were sold per day. The company aims to sell 42,000 Tucson units this year.

The company also showcased its Sonata plug-in hybrid, which was unveiled for the first time at the North American International Auto Show in Detroit in January. This is its Asia debut. The charge-at-home car has a 2.0 Nu GDI engine that operates with a 50 kilowatt electric motor and a 9.8 kilowatt-hour lithium-ion battery. The car can drive up to 40 kilometers in electric mode. Kwak Jin, executive vice president of Hyundai’s domestic sales division, said the company aims to sell 6,000 Sonata PHEVs through the end of next year.

Hyundai Motor’s sister company Kia Motors showed its new K5 sedan, a second-generation model and the first makeover since 2010. The company unveiled the car to the public for the first time at the show. The most significant feature of the car was its front exterior design, which comes in two different styles in two trims, the MX, or Modern Extreme, and the SX, or the Sporty Extreme. The design targets consumers in their 20s and 30s.

“It is developed based on a design concept of ‘advanced modern dynamic,’ which focused on making a simpler and stylish body design than its predecessor while keeping its original design identity,” said Peter Schreyer, president and chief design officer of Hyundai Motor Group. The model is offered in several engine trims: 2.0 gasoline; 1.6 turbo; 1.7 diesel; 2.0 LPI; 2.0 hybrid and 2.0 plug-in hybrid.

The nation’s smallest automaker, Ssangyong Motor, introduced a new concept SUV XAV that embodies the company’s future direction in car development. The company said the XAV has achieved both driving power and efficiency with a 1.6-liter engine and e-4WD (four-wheel drive) system, comprising a lithium-ion battery and electric motors mounted on the front and rear wheels.

Regarding sales strategies in the global market, CEO Choi Johng-sik said, “Since the company’s biggest global market is Europe, we expect the Tivoli SUV to lead sales. We are also working on providing strategies for the U.S. market, which the company hasn’t yet entered, with the XAV. We currently conclude that we are able to achieve this year’s goal of selling 150,000 units.”

Chevrolet also attracted attention by introducing a recreational vehicle, the next-generation Chevrolet Spark, for the first time. The company is showing a total of 27 cars in 3,200 square meters of space. The model is built with a 1.0-liter, three-cylinder Ecotec engine and next-generation C-tech transmission. It also offers a series of high-end safety options including a lane departure warning system and forward collision alert.