Getting a grip on all three branches of government

Getting a grip on all three branches of government 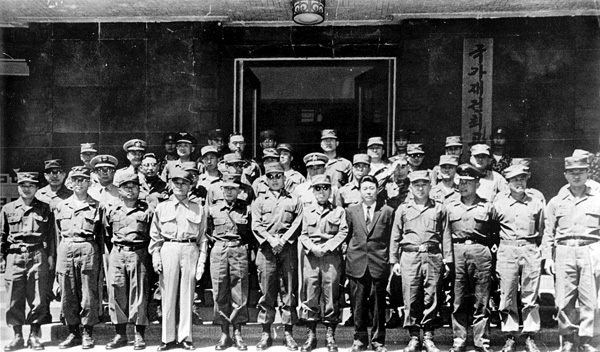 Members of the National Reconstruction Supreme Council pose for a photo following their first meeting on May 20, 1961, four days after the military coup. Fifth from left is Park Chung Hee. Provided by Kim Jong-pil

In short, the revolution dissolved the legislative branch while taking over the executive functions of government, as well as having power over the judiciary branch. It was a bold declaration that the committee would hold power over all three branches of government.

On May 18, Prime Minister Chang Myon appeared in public, breaking a 54-hour absence during which he hid at a monastery in Seoul. He declared the resignations of all of his cabinet members. Chang, who symbolized the old rules, was shoved off the center stage of history.

By then, the declaration of promises had been read and they had to be delivered. The revolution had entered a new phase. All our power must now be dedicated to opening a new era that could deliver on our promises. On the night of May 17, I stayed awake through the night laying out blueprints for new governing initiatives based on a new set of orders and rules designed by revolutionary forces. 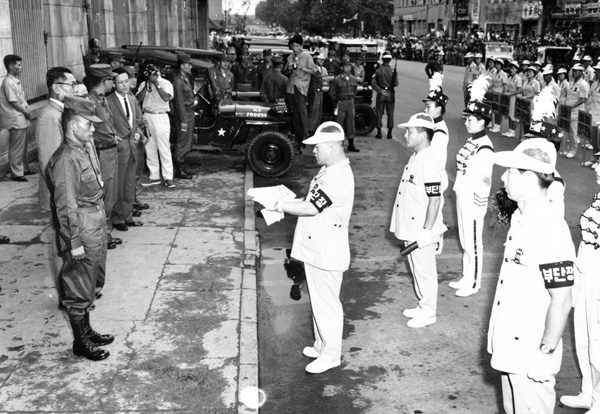 Park Chung Hee, far left, gets a report on the participation by artists in the people’s movement for national reconstruction in a military style ceremony on July 7, 1961. Kim Jong-pil is seen wearing a necktie. Provided by Kim Jong-pil

Right after Chang Myon announced his resignation on May 18, I went to Park Chung Hee to report to him my blueprint work for the new era. On May 20, Park convened the first meeting of the military revolutionary committee in which 30 military officials who participated in the revolution and two advisers joined.

Park and Chang Do-young, who was Army Chief of Staff before the revolution, announced who would take which positions on the committee during the meeting.

When it was my turn to speak, I proposed to change the name of the revolutionary committee to the National Reconstruction Supreme Council because I thought the term “supreme” carried authority. I named it using the words “national reconstruction” because I thought the real value of a revolution is its attempt to alter the status quo from top to bottom. I wanted to let people know the sincerity of our efforts to make a country free from the enduring troubles and chaos of the devastating Korean War.

Moon Jae-joon, sixth corps artillery unit commander, interrupted me, complaining that the term “supreme” was often used in socialist countries. Other military officials originally from North Korea agreed with him and it led to a heated debate.

Park Chung Hee grabbed his microphone and said, “Let’s put an end to this discussion over the name. It is not as important as what we can achieve and answering the demands of the people. We are out of time so let’s get back to the name issue later. Let’s focus on the contents of Kim’s proposal for the policy initiatives.”

Returning to the podium, I said, “The Supreme Council will assume full authority over the three branches of government. It will be the highest governing body in Korea.”

I explained there would be six governing bodies under the Supreme Council including the intelligence agency, reconstruction and planning committee and the capital defense command. I also proposed to move the headquarters of the Supreme Council from the army headquarters in Yongsan to what is now the Seoul Metropolitan Council in the Jongno District.

I had premediated long before the May 16 revolution to set up a new set of rules that could bring major changes to every sector of society. I had a clear vision for post-revolution Korea.

On June 6, the emergency reconstruction law, what also could be called the revolutionary constitution, was ratified, legally empowering the Supreme Council as the highest governing authority.

The 32-member Supreme Council had legislative authority as the parliament had been dissolved. The council also had authority to appoint and dismiss cabinet members. Military officials took all ministerial posts. Most of the Supreme Council members were in their 30s, including myself. The oldest member was the 44-year-old Park Chung Hee. The average age of ministers in the newly formed cabinet was 39, down from 55.8 in the Chang Myon administration.

The appointments of young military officials injected freshness into the government as most had spent some time in the United States studying. Between 1951 and 1961, some-11,000 military officials learned of the modern systems of the U.S. through a state-sponsored overseas study program.

It was now time to spread the new Korean can-do spirit to the public, who longed for a national transformation. We formed the People’s Movement for National Reconstruction Headquarters, which aimed to modernize the way Koreans perceived the world. In the 1960s, people still prayed for rain during droughts. I thought people needed fresh guidance on how to behave ?and how to be responsible citizens abiding by the social order.

We also formed the National Planning Committee for Reconstruction, which was tasked with laying out and developing economic growth blueprints. The foundation of that committee sprung from my idea that we first need to drive hunger from Korea and spark an economic boom so that principles of democracy could be set in place afterwards based on prosperity.

I directed the foundation of the Korean Central Intelligence Agency and guided that institution. My task focused on getting rid of social elements that would interfere with our objectives.