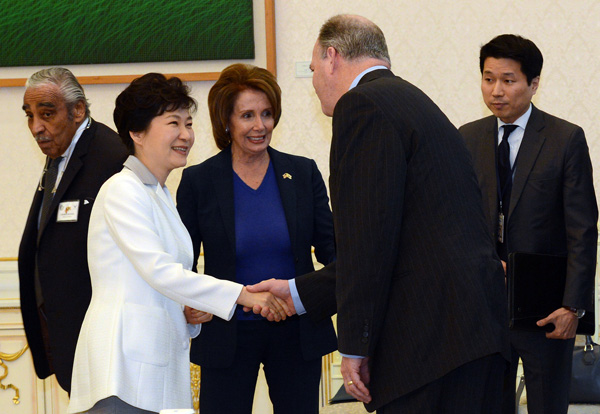 A congressional delegation led by U.S. House Minority Leader Nancy Pelosi met with Korean leaders including President Park Geun-hye on Thursday in Seoul, where they discussed regional and bilateral issues, particularly the outstanding historical issues between Korea and Japan.

During their meeting at the Blue House, President Park explained to the delegation the urgency of resolving the issues concerning Korea’s “comfort women,” a term used for the women Japan coerced into sexual slavery during World War II.

Park pointed out that the victims are now elderly - some reaching 90 years old - and that the clock was ticking, a Blue House official said.

Pelosi replied that the issues needed to be resolved for the sake of women’s rights, the official said.

Tokyo’s refusal to officially apologize for forcibly recruiting thousands of young women, mostly Koreans, into military brothels during World War II has long been a key point of contention between Seoul and Tokyo.

The delegation’s visit to Seoul came at a delicate time, with Japanese Prime Minister Shinzo Abe set to address the U.S. Congress later this month.

The American lawmakers will visit Japan next.

The comfort women issue was again addressed at the delegation’s meeting with Foreign Minister Yun Byung-se.

After the meeting, Pelosi also discussed the matter with reporters.

“[President Park] gave us the message that she wanted to give us [when she spoke before Congress in 2013],” she said.

“Prime Minister Abe will do that as well but we have been clear about what we would like to hear about comfort women, whether the prime minister does that in his speech or not,” Pelosi continued.

She said she hoped Abe would apologize in some way, adding that he would probably want to make a statement in his own country, rather than during his address to the U.S. Congress.

“She visited both North and South Korea in August 1997, along with members of the House Permanent Select Committee on Intelligence,” Min said. “She was also the speaker of the House when it passed the ‘comfort women’ resolution sponsored by Congressman Mike Honda.”

The resolution, passed in 2007, called on the Japanese government to formally acknowledge its coercion of thousands of young women into sexual slavery and apologize to its victims.