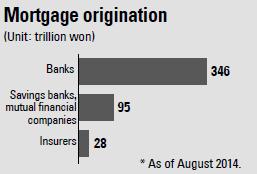 A 55-year-old resident of Ansan, Gyeonggi, who wished to be identified only by his family name Shin, took out a mortgage with his low-rise housing unit as collateral three years ago. The loan was for 70 million won ($64,000) from a nonbanking mutual financial company.

Shin recently tried to refinance his loan to the government-backed bogeumjari loan, which offers a lower interest rate, but soon gave up on the idea after learning he would have to pay down the principal by roughly 25 million won to qualify because the value of the house he put up for collateral has fallen. In addition, a bogeumjari loan can be for no more than 70 percent of the property’s value, while the ceiling was 80 percent when he took out his mortgage.

“It’s tough just trying to pay the interest, but when they told me that when I switched to the bogeumjari loan I would have to pay both the interest and pay down the principal, I had no other choice but to give it up,” Shin said.

The application period for refinancing existing loans to the so-called anshim jeonhwan daechul (literally “converting to a safer mortgage”), a government-backed fixed-interest loan with an average rate of 2.6 percent, ended Friday.

The loan program was intended to protect homeowners from unexpected interest rate increases at a time when household debt is edging closer to a record 1,090 trillion won. The popularity of the loan far exceeded expectations and forced the Financial Services Commission to double the amount of available funds from 20 trillion won to 40 trillion won.

But a backlash already is brewing from those who were rejected because of poor credit ratings or low income, or because they have loans from nonbanking financial institutions that were excluded from the loan program.

Politicians and nonfinancial companies are joining in, calling for the government to come up with a backup plan.

As a result, the Financial Services Commission announced it will design a comprehensive plan tailored to low-income, poor credit households.

But market experts say addressing the problem won’t be easy. To meet growing demand, the government would have to come up with something equivalent to the anshim loan.

A year ago, the government offered a program similar to the bogeumjari loan targeting borrowers with mortgages from nonbanking financial companies.

However, the result was a disaster as it failed to generate much interest. The loan pool was 100 billion won, attracted only 10 borrowers amounting to a total of 990 million won.

Nonbanking financial companies were unenthusiastic about the program.

“Properties that were put up for collateral on loans from nonbanking financial institutions were seeing their value fall more than those at banks, while the rate of past due payments was high,” said an official at Korea Housing Finance Corporation. “Therefore, lowering the interest rate sufficiently increased the burden on financial companies by an equivalent amount. No one wanted to take on the burden of the loss to reduce the cost for their clients, and there was no way to convince the financial companies otherwise.” Even borrowers had a lukewarm response.

To create a similar loan program like the one for the banking industry that would be popular in the nonbanking sector, the interest rate would have to be lowered further and the government would have to bear the risk.

Another option the financial authority is looking into is reforming other financial programs for low-income households, such as the haetsal and bakkuadeurim loans, and expanding the funding pool. But even this seems problematic.

Bakkuadeurim loans began not long after the global crisis of 2008. It was a loan program that would convert exceptionally high interest loans from private financial companies and capital firms to bank loans with interest rates of 8-10 percent.

The program started well, with the overdue payment rate 1.5 percent in 2009. But as time passed more people started to benefit from the program, and delinquency started to rise.

“In encouraging people to switch to the loan program by guaranteeing 100 percent of the principal, financial companies became lax in their review and management and immoral practices by debtors started to surface,” said Lee Jae-yeon, a Korea Finance Institute researcher. “For a financial program targeting low-income households, instead of rushing to lower the interest rate, there first should be better screening of borrowers and improved management of financial companies.”

The FSC on Thursday said its fundamental direction is to reform the financial system for low-income and poor credit households to support self-sufficiency of borrowers.