Actress Go Ah-sung found it hard to let go of her unsociable character Yona in the 2013 film “Snowpiercer” after avoiding going out in public to throw herself into the role.

The young star’s next job, however, is dramatically different.

Go acts as a high schooler in the KBS black comedy series “Heard it Through the Grapevine.”

She plays Seo Bom, who gets pregnant with her boyfriend from a high-profile family and is very confident about becoming a mother and a wife. She doesn’t hesitate to state what she thinks is right or wrong, even in front of the wealthy and powerful clan. 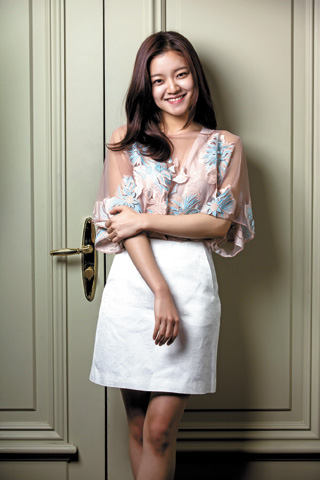 Although she has played many teen roles, the 23-year-old, who debuted a decade ago, says being given the title “child actress” doesn’t really bother her.

After all, even though Go started out young, she has mostly taken roles of girls fighting for what they want, just like her character in 2006 film “The Host.”

Go said the characters she picks have to be independent during a recent interview with the JoongAng Sunday, an affiliate of the Korea JoongAng Daily. She also said she has been thinking about how she will build up her acting career from now on.

Q. What is it like to do a TV drama after not being in one for a while?

A. I was worried about whether I could follow the faster production that usually comes with TV dramas because I’ve only done movies for the past few years. But, after I started working with director An Pan-seok, my concerns melted away. I felt like I was filming a movie more than any other pieces I’ve worked on.

Was it difficult to act as a young mother who gives birth?

It really doesn’t reflect how a child actress normally makes her way into being a grown-up actress. But that didn’t particularly impose any burden on me. I kept talking to the people around me who have experienced childbirth as all the mothers will judge to see how well I recreate the experience.

I can’t help it if the audience remembers me as a child actor just because I was a minor in the pieces or I looked young. The characters I played are all very mature ones, including Bom, who I’m playing right now.

Does reading books inspire you?

I prefer reading a genre I like. I like essays better than novels. Since novels are fictional, it feels like I have to imagine [the scenes], and that made me feel like there are two layers of stories that I need to take in. So I feel tired easily. Since essays are first-person stories, I think those read more smoothly.

Do you also write?

I have been keeping diaries every day since I was 16. I first write on a computer and then copy it down in my own handwriting. I can’t possibly catch up with the speed of my thoughts being processed if I try writing them down in the diary by hand.

Don’t you want to publish a book with your daily stories?

Never. Diaries are written based on the assumption that no one will ever read them.

What else do you enjoy doing?

I watch documentaries a lot more than movies. Acting comes from real-life experience. Let’s say I’m filming a scene in which I need to cry, I will most likely mimic someone I have seen crying before. When I watch people cry in documentaries I feel more inspired, thinking that I want to act like that.

Were you experiencing a slump before you started filming for this new drama?

No, it was just really hard to get out of the character in “Snowpiercer.” I focused on that movie for the past few years without thinking what I would do after it ended. It felt like a really tight rope was becoming loose. I started to think that I would try to take on many different characters rather than delve into one for a longer period of time because I felt so empty.

What made you feel so exhausted?

At one point I felt like I was acting by using the same patterns. I thought a lot about how I want to throw away what I usually do and reset myself. Then I started to think about what I needed to do to get a fresh start.

Do you plan to do a Hollywood movie after you signed a management deal with Hollywood Untitled Entertainment, which represents Ashton Kutcher and Uma Thurman?

I was actively in communication with them until I started filming this drama. But I’m not in a situation to continue doing that, so it’s been on hold.