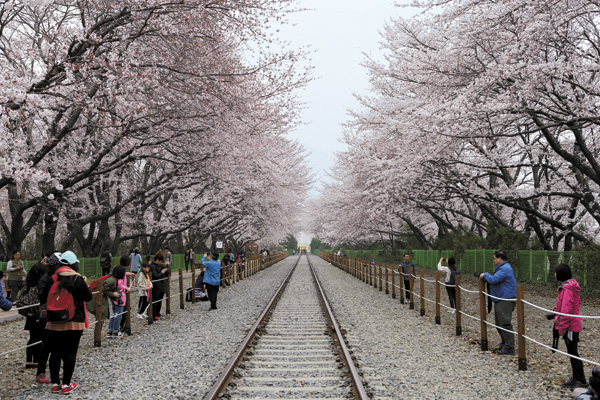 Jinhae, South Gyeongsang - Every year around this time, people start avidly checking the weather forecast. If it looks good, a woman may dream about wearing a skirt that flutters as she chases new flowers in bloom while a man might gather up his camera gear to take photos of the new season’s flowers, hoping for a substantial run this year.

Those longing for spring can soak up the vibes in Jinhae, a district in Changwon, South Gyeongsang, that is filled with more than 380,000 cherry blossom trees coloring the streets white.

Spotting the blossoms is always thrilling because they never last for more than 10 days. If you can’t be in Jinhae this weekend, you risk missing the best time of the year to appreciate the flower-filled district, as the blossoms won’t wait for you.

In the area, the blossoms usually start to bud in late March at the earliest, just like in any other southern region of Korea.

But don’t be too discouraged if you can’t make it down south this weekend to see the short-lived blossoms. There might not be as many flowers intact on the trees, especially if it rains, but as they get ready to fall, a simple gust of wind can shatter the flowers in bulk, making it look like a downpour of blossoms. The slowly falling petals also provide a breathtaking backdrop.

To ensure visitors make the best memories, the district holds Jinhae Gunhaeji, an annual flower festival celebrating its 53rd edition this year, through April 10. Until then, lights are set up all across the district to highlight the blossoms at night after sundown.

The major attraction in the area is Yeojwacheon, a 1.5-kilometer stream that is lined with cherry blossom trees on each side. 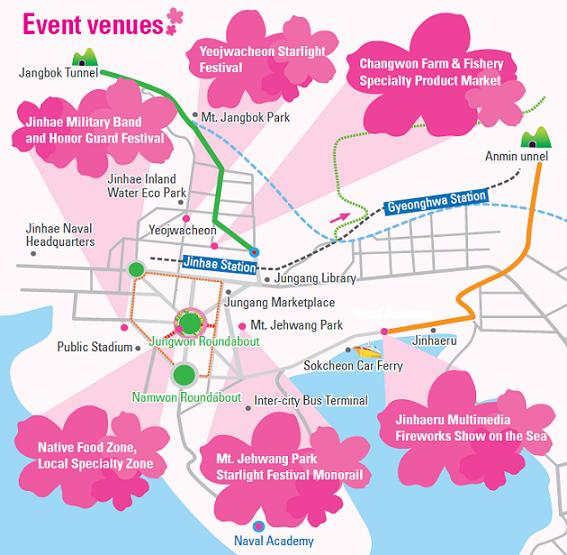 The spot became better known after the 2002 TV drama “Romance” chose it as the location where the lovebirds in the show meet each other for the first time.

Ever since, many new couples visit to make a wish for long-lasting love along with family and friends who want to see what the hype is all about.

As more people gather to see the flowers every year, the city has implemented several decks and decorations to create a better experience taking photos.

There are multiple bridges set up so that visitors can get a straight shot of the stream with the trees behind them.

The location is also known as Romance Bridge as a result.

Local tour agencies and global media such as CNN Travel chose the area as one of Korea’s must-visit places.

Gyeonghwa Station, which is no longer in use, is another popular destination in Jinhae. Along the railroad, flower trees arch towards one other on each side.

Korail operates a special tour train from Masan Station to Jinhae Station, which also passes through Gyenghwa Station. This gives visitors a chance to appreciate the combination of the train, railroad and falling petals. Riders can enjoy a floral view of Jinhae District without having to walk too much.

Visitors should be aware that it might be impossible to get a clear shot of just the train and the flowers in photos, as the district welcomes around 3 million visitors during the festival.

If you want to forget about the crowds when you travel down to Jinhae then try packing your earphones and play songs about spring such as Busker Busker’s “Cherry Blossom Ending,” or IU’s “Not Spring, Love, or Cherry Blossoms,” which have been racing up many local music charts recently.

Less touristy areas are more fun to walk slowly around and chat with your friends or family.

Mount Jangbok Park, Sirubong Peak at Mount Ungsan or Jehwansang Park are perfect if you decide to journey around the district. But if driving suits you better, head to Anmingogae, a road that is surrounded by flowers.

If you really want to get off the beaten path, you can get on a ferry and take in the view of the district from the water. As Jinhae is located by the South Sea, a ferry that takes visitors on a tour that lasts about an hour leaves regularly from Sokcheon Harbor. You can witness the white and pink flowers covering the mountains, which the water reflects.

The district also hosts the Jinhae Military Band and Honor Guard Festival at the same time as the festival.

The district, which houses the Korean Navy, has organized for officers to march down the streets while playing musical instruments since 2007, which creates a grandiose scene.

Additionally, the district’s Republic of Korea Naval Academy opens up its campus to the public during the festival.

Treat your stomach as well as your eyes while in Jinhae.

From Top to above: Jinhae Military Band and Honor Guard Festival will have a parade on the streets of Jinhae, South Gyeongsang. ;Yeojwacheon is another popular destination for people traveling to see cherry blossoms. It became widely known all across the country and even to the world after the TV drama “Romance” was filmed there in 2002. ;Breads shaped like cherry blossoms are good snacks or souvenirs to bring back home as they contain cherry blossom extracts in their filling.

In many stores across the district, you can find bread shaped to look cherry blossoms. They have a light pink color filling made with extract of the flowers.

Local bakeries have started to produce other goods using the floral ingredient, such as cupcakes and roll cakes, because of the popularity of the original snack.

If you are looking for something a little less sweet, Jinhae is also known for its bean treats that have been around for about 100 years.

The round goods that are about the size of a pinky fingernail are made with bean powder and flour, and covered with sugar syrup.

The taste may not be as fancy as other snacks people can find at stores, but the fact that the same family has been making the food through three generations continues to lure people into trying it out.

As the area is by the South Sea, you can also fill your stomach with a variety of fresh seafood. The most popular dish to eat in the spring is a soup made with flounder and mugwort, called ssuk.

In early spring, a smaller flounder fish, called dodari in Korean, tastes particularly good. People usually eat it raw or make a soup called dodari ssukguk. The dish can be found at most restaurants in the district that serve Korean-style food. One bowl ranges from 10,000 to 15,000 won depending on the size of the fish you choose.

If you prefer snacking, you can go to the downtown area of Jinhae where the Jinghae Gunhaeje food zone is located.

The entire street is filled with a variety of dishes and drinks including pajeon, Korean-style pancakes made with scallions, or jokbal, smoked pork feet.

In the earlier years Jinhae’s flower festival was more like a ritual organized to pay tribute to naval Gen. Yi Sun-sin (1545-1598), who is immortalized in a statue in the area.

From 1963, the district made the event more festive to promote itself to outsiders looking for travel destinations.

Jinhae started to plant wangbeot, a type of cherry blossom tree indigenous to Korea, in the 1960s. Now the festival includes a variety of events, including concerts in the downtown area at night for visitors looking for entertainment after a day spent searching for the traces of flowers.

*The 53rd Jinhae Gunhangje lasts until April 10 all across the district of Jinhae in Changwon, South Gyeongsang.

For more information about the event, call (055) 225-3041, or go to http://gunhang.changwon.go.kr. The Jinhae Military Band and Honor Guard Festival will last until Sunday.

To get to Jinhae, head to Seoul Station and get on the KTX to Masan Station. The journey takes about three hours.

For more detailed information about the schedule, call (02) 3149-2510 at Seoul Station or go to www.letskorail.com.

If you would prefer to take an express bus, head to Nambu Terminal in southern Seoul to Jinhae Bus Terminal. To get the schedule, call (02) 521-8550 or go to www.nambuterminal.co.kr.