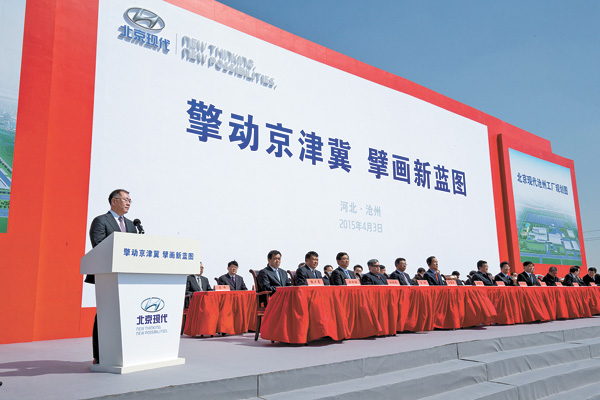 Hyundai Motor on Friday announced it had broken ground on a production plant in Hebei Province, its fourth in China.

The company built the first of its three plants in Beijing in 2002. It also will start construction of a plant in Chongqing in the second half of this year.

When the two plants are finished, the company’s total production capacity will go from 1.79 million units this year to 2.54 million in 2018.

“We are very pleased to build this plant in Cangzhou, where it will be a new growth engine in the economy,” said Chung. “I look forward to writing a new chapter of the Hyundai Motor miracle with our Chinese partners.”

The company is aggressively expanding its production in China because the market, already the biggest in the world, is forecast to grow even more. About 17 million cars were sold in China last year, and sales are expected to increase to 23.31 million in 2018.

Hebei is a new economic growth area where the Chinese government and local businesses are investing huge capital on an airport, railways, roads and other infrastructure.

Hyundai said the new factory would create synergy with its plants in Beijing as it is only 215 kilometers (134 miles) away.

It also is close to Tianjin harbor, where the company’s parts logistics base is located. A logistics infrastructure consisting of five main-line railways and seven highways provides a good environment for businesses.

Once the plants are completed, the company is expected to secure a market share of about 10 percent in China, which would give it a chance to become the third-largest automaker in the country and compete with rivals Volkswagen and General Motors.

The Hebei plant had been slow to get off the ground because the Chinese government, which signed an agreement for a plant in Chongqing in March 2014, worried about an oversupply of cars and dragged its feet.

The Chinese government suggested that Hyundai build its fourth plant in Hebei. China imposes a 22.5 percent tariff on imported cars. But concerns still remain that the company might face some barriers in the future since the Chinese government is cutting benefits for foreign companies operating businesses as part of its initiative to protect local businesses.

“We will try to build up a stronger relationship with local partners as expanding our business would give some new business opportunities to local companies including part manufacturers,” said Hyundai Motor in a statement.

“We will also contribute to the society as we will continue hiring more local citizens.”