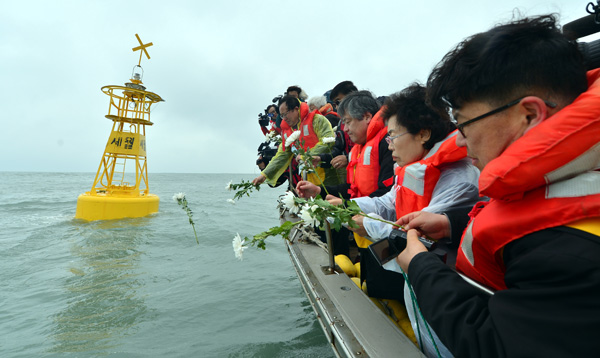 Families of the Sewol ferry victims and members of the National Council of Churches in Korea, a Christian group, throw flowers into the waters where the ship sank after a prayer on Friday. The ferry sank on April 16, 2014. [NEWSIS]

The government discussed a wide range of support measures for relatives of the victims of the Sewol ferry accident, in which 295 passengers and crew members died.

But none of the measures proposed Friday were in line with what the relatives want.

A support and memorial committee for the Sewol tragedy chaired by Minister Choo Kyung-ho of the Office for Government Policy Coordination held its first meeting Friday at the government complex in central Seoul, right next to Gwanghwamun Square - very near where some victims’ relatives are protesting proposed compensation for the victims’ deaths announced Wednesday and the composition of a special investigative team to seek out the facts behind the ferry’s capsizing last April 16.

The support and memorial committee, separate from the compensation committee, decided on Friday to provide financial support, medical treatment and other administrative support to the families.

Families of people who died in the accident were to be given living expenses of about 1.1 million won ($1,000) for a four-member family for up to six months.

The government would also provide free counseling at the Ansan Trauma Center and 212 mental health centers across the country and compensate people who need medical treatment for trauma. Scores of 11th grade students from Danwon High School in Ansan, Gyeonggi, died in the tragedy.

In the case of relatives needing leaves of absence from work to treat physical or psychological problems, the government will guarantee up to six months in leave and pay their employers up to 1.2 million won a month in compensation, plus another 600,000 won for substitute workers.

The teachers and workers at Danwon High School are also being allowed to take paid leave of up to a year.

“I expect the support and memorial committee that was established according to the special Sewol law will play a key role in consoling the relatives of the deceased and remind us of the lessons we learned from the accident,” said Choo in introductory remarks. “The committee must open the window to communicate with the victims and their relatives and do its best to take care of every single one of them.

“We should also put every effort into reflecting the needs of the victims and their family members while we pursue support and memorial projects.”

But many relatives expressed anger and distrust, especially about the special team investigating the accident.

Relatives of victims started a 416-hour rally Monday that will end on the first anniversary of the accident on April 16 in Gwanghwamun Square. They are particularly enraged at the idea of government officials working on the special investigation team, saying they will undermine the team’s work and stop the truth from getting out.

The relatives grew even more furious Thursday after they heard about the death compensation plan, claiming the government was trying to buy their silence. On Thursday 48 of them had their heads shaved in protest, and four more parents of students who died tonsured their heads at Paengmok Harbor in Jindo County, South Jeolla, where relatives of the nine still-missing passengers are awaiting the finding of their remains.

The relatives don’t want compensation until the government makes a clear decision on salvaging the ship from the bottom of the sea and the full truth is revealed about the cause of the accident and the poor rescue operation. More relatives will have their heads shaved on Saturday before they begin a protest march in Ansan.