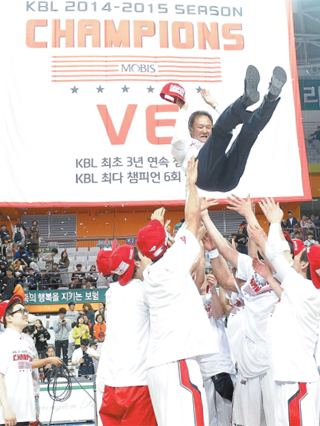 The team beat Seoul SK Knights for the win in the 2012-13 season, and overpowered the Changwon LG Sakers last year for the title.

Saturday also marked Phoebus’ sixth overall KBL championship title, the most among any other team. Before this series, it had stood tied with Jeonju KCC Egis for most championships won.

With Phoebus ending the best-of-seven series at Game 4 this season and in the 2012-13 season, it was swept by the Seoul Samsung Thunders in 2005-06.

“I’m happy that we set a number of records after the victory,” said Phoebus coach Yoo Jae-hak. “I just want to say thank you and good job to our players.”

For Yang, it was a double honor: He was named MVP in the championship series for the third time in his career and the best in KBL history. The veteran point guard averaged 20 points in the finals. He delivered 22 points in Game 4, with six rebounds and five assists.

“I’m fortunate because I think I just met good players,” he said. “I think I received the award as the team’s representative.”

In the regular season, Yang played an average of 34 minutes and 56 seconds, the most among any other players. In the semi-finals, the 33-year-old played 38 minutes and 19 seconds, while in the championship series, he played 36 minutes and 27 seconds.

“My parents gave me a strong body,” he said. “Every day, I play basketball with the mindset that I might retire tomorrow.”

The situation for Yoo was a bit different, however: He was unable to train with the team during the offseason, helping the national team instead prepare for the FIBA Basketball World Cup and the Incheon Asian Games, where he delivered Korea the gold.

Still, his team surpassed his expectations, largely thanks to his long-time coaching experience, which spans 12 years, the longest among his counterparts.

“My assistant coaches prepared very well for this season, and I thank them for that,” Yoo said. “We didn’t really falter much this season because we have a good system in place.”

But the first KBL coach to surpass 500 wins did admit he had some concerns coming into the finals.

“We lacked back up members, and Ira Clark was a concern,” he said. “However, Yang did his job very well, while Clark also performed well in the playoffs.”

When asked the key to his success with four regular season titles and five championship rings under his belt with Phoebus, the former point guard said his past experience was crucial.

Yoo started out coaching in the KBL at 35, when he took on training the Incheon Daewoo Zeus, now the Incheon ET Land Elephants, in 1998.

“I became familiar with KBL basketball by losing a lot of games,” he said. “I’ve built up my own knowledge, which may not work in international competitions, but it can work in the KBL.”

Yoo recently signed a new contract and is slated to lead Phoebus until 2020 and is currently eyeing a new way of playing basketball in the upcoming season. “I want to reduce the dependence on regular members, and play the game so that all the players in the squad can contribute,” he said. “There’s nothing special about it. I just want basketball’s popularity to grow.”

Meanwhile, the loss for Promy, which was seeking a fourth KBL championship, was an especially hard blow. The team failed to win a single game in the series and saw its opponent celebrate victory on its home court.

Led by rookie coach Kim Young-man, Promy had an especially difficult time in Game 4, with forward Yoon Ho-young sidelined due to an arm injury.