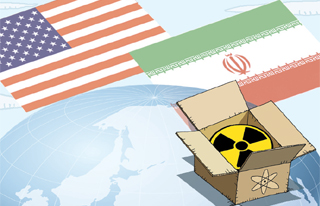 Here in Washington, everyone is watching the nuclear negotiations with Iran. Secretary of State John Kerry has spent many hours in Lausanne, Switzerland trying to hammer out an agreement with other P5 members and his Iranian counterpart. It’s the sort of high stakes diplomacy that we have not seen since the sixparty North Korean nuclear negotiations. Having the vantage point of a participant in those negotiations, and watching these negotiations as a bystander, I am struck by a few observations.

First, is the palpable lack of trust in the P5 negotiations with Iran. This, of course, was no different from the six-party talks with North Korea. Levels of suspicion are insurmountable, built on decades of adversarial relations. What this means in both the Iran and North Korea cases is that any deal would have to be implemented on an incremental, step-by-step basis. North Koreans liked to call it “action for
action.” In international relations theory, it is known as “tit-for-tat” strategies. But the idea is that since no one trusts the other to live up to the agreement, each step by one side must be matched by a step from the other side. And the first step must happen simultaneously.

The second observation relates to the target state and the lifting of sanctions. Presumably, it is the pinch of sanctions that brought North Korea or Iran back to the negotiating table, and so that country remains focused on the pace of the sanctions lifting in the agreement. In return for measures taken on the nuclear side, both Tehran and Pyongyang want to see economic sanctions removed quickly, permanently, and even disproportionately to actions taken on the nuclear side. In the Iran negotiations, they have borrowed a term from trade deals — the so-called “snap back” clause which provides for the reinstitution of sanctions if the deal falls apart. This issue remains a sticking point in negotiations because the sanctions are not only bilateral, but can involve the UN, which complicates how to unwind them.

The third observation has to do with residual nuclear capability. Whether Iran or North Korea, the target state involved in the multilateral negotiations wants to retain as much nuclear capacity as possible. In North Korea’s case, it was making a deal on its plutonium program at Yongbyon while compartmentalizing and hiding a second secret uranium-based program. In Iran’s case, it is about retaining
weapons-grade fuel, advanced research capacity, and a term limit to the framework agreement.

The fourth observation is that any agreement will only be as good as the access afforded to international inspectors to monitor the deal. Verification of North Korea’s behavior with the Agreed Framework or with the Six Party talks required unimpeded access by IAEA inspectors to sites under the agreement and other possible sites that might be in violation of the agreement.

Already the IAEA has complained about incomplete access to Iran’s facilities, which is not a good harbinger of things to come, but is very similar to problems with the North Korea agreements.

Fifth, by virtue of the fact that the Iran deal is being negotiated personally by the Secretary of State and other P5 foreign ministers, there is much more at stake politically to the Obama administration than in the North Korea deals, which had been traditionally negotiated at the assistant secretary level. Failure would be an embarrassment and could spark a crisis, as there is no higher level to appeal. This also
means that negotiations could easily enter a grey area where concrete quid pro quos are replaced by “understandings” that are more nebulous, but allow both sides to claim that they got what they wanted. These sorts of outcomes almost invariably fail in their implementation once the negotiators sit down to define the details.

Finally, the Iran negotiations could disadvantage future negotiators of a North Korea deal. The premise that Iran could keep spinning thousands of centrifuges and enrich fuel as part of a deal would set a precedent that Pyongyang would almost certainly refer to if they ever came back to the table. Such a deal is already much better than the “CVID” formula that the six parties have pressed on Pyongyang. The North is probably rooting for a deal with Iran to come through, which raises the question for South Korea and the United States whether such a deal is advisable.

*The author is a professor of government at Georgetown University and senior advisor at the Center for Strategic and International Studies in Washington D.C.