From politics to figuring out the world

From politics to figuring out the world 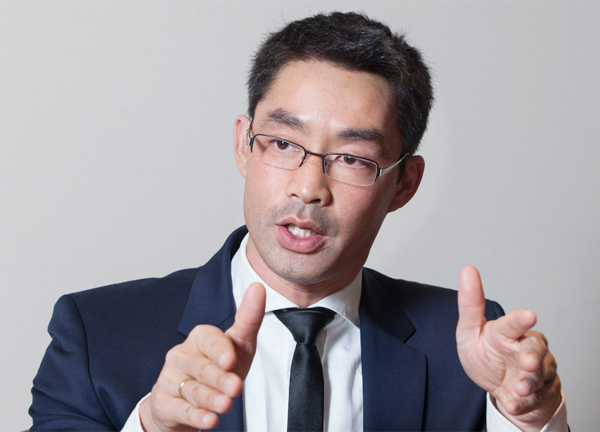 My native Vietnam “simply has no deeper meaning for me,” German politician Philipp Rosler said in 2012. Now, however, he has more interest. By Park Sang-moon

German politician Philipp Rosler made headlines for his milestone achievements even before he turned 40. In 2011, Rosler became the youngest Vice Chancellor of Germany at the age of 38.

He then took on the roles of federal minister of economics and technology as well as chairman of the liberal Free Democratic Party (FDP) between 2011 and 2013. His personal background as an adoptee from Vietnam in the 1970s added to his fresh reputation.

Leaving behind a successful career in the public sector, Rosler took on a fresh challenge last year to become a member of the management committee of the World Economic Forum, best known for its yearly conference in Davos, Switzerland.

The former physician turned politician visited Seoul on Tuesday to promote the forum’s transformation from a private foundation into an international institution for public-private cooperation following recent formal recognition by the Swiss government under the Swiss Host-State Act. Now the forum has the same status as the International Olympics Committee or the Red Cross, he said.

“We want to work closely together with the South Korean government on the one hand as well as the private sector, and explain our new status,” he said as he sat down briefly with the Korea JoongAng Daily at a hotel in downtown Seoul.

During his 12-hour stay in the capital, Rosler met with Korea’s foreign affairs minister, unification minister and senior presidential secretary for foreign affairs. He took a short stroll around the Samcheong-dong area near the Blue House and had a one-on-one meeting with Charles Lho, the former publisher of the Korea JoongAng Daily.

It was his first visit to Korea.

“It was interesting to discuss what is going on here and the topic of unification, in particular,” he noted.

As a member of the forum’s management committee, he said he chose to visit Seoul because he was intrigued by the idea of unification.

“My [adoptive] father was a soldier in the western part of Germany [before unification] and we always saw the border,” Rosler said. “I learned that Korea has a 5,000-year history, and the recent period of separation is a very small part, which is unnatural, too. I wonder if we can contribute something.”

But the difference between pre-unification Korea and Germany is that the latter always had exchanges between families and some kind of collaborative project involving both East and West. All radio and TV broadcasts were accessible in both parts of Germany, making it possible for everyone to have knowledge about the other side - a prospect that would be unacceptable to North Korea.

Rosler was born in Khanh Hung in the Vietnamese province of Ba Xuyen in 1973 and was adopted from a Catholic orphanage as a 9-month old infant by a German couple. After being trained as a combat medic in the Federal Defense Forces of Germany, he was accepted into medical school and became a qualified heart surgeon.

But he left the service in 2003 to pursue a political career.

Following national elections in 2009, he succeeded Ulla Schmidt as Federal Minister of Health in Angela Merkel’s second cabinet, and in 2011 he took multiple positions as federal minister of economics and technology, chairman of the FDP and vice-chancellor of Germany, all of which lasted until 2013. He offered to step down as party chairman after the FDP’s defeat in the 2013 state elections in Lower Saxony in northwestern Germany.

He was nonchalant about his Vietnamese heritage in media reports. He told Spiegel Online in a September 2012 interview, ahead of a visit to his birth country, that Vietnam “simply has no deeper meaning for me.”

He added that he was visiting as the economics minister, as a representative of German business, and not on a personal search related to his past.

But his perception changed over time, he confessed. Following his trip in 2012, he went to Vietnam again in November for the World Economic Forum.

His 6-year-old twin daughters, he said, have started asking where they came from because they feel they look different from others in the country - Rosler’s wife is a German-born physician. So he has decided to take a vacation to Vietnam this summer.

“Genetically, I come from Vietnam,” he said. “Imagine what would happen in Korea if one adopted child would become a vice chancellor of a very important and beautiful country like Germany.”

When told about the example of Fleur Pellerin, the French minister of culture and communications since Aug. 26, 2014, Rosler said he has met her several times. She is a native Korean, born in 1973, who was adopted by a French family when she was 6 months old.

They sat at the same table as counterparts for a telecommunications panel at a Davos forum in January 2013.

He also recalled that his last official speech as minister was delivered in her presence. He did the entire speech in French, while she did her part in German, which he said he found interesting.

When asked to offer his opinion on the controversial issue of Germany providing more debt relief to Greece, Rosler said that, on a personal level as a European citizen, he hoped Greece could find solutions by proceeding with reforms to improve competition as it promised earlier.