[Cooking with Her Excellency, Ireland] Chowder gives a taste of the ‘green isle’

[Cooking with Her Excellency, Ireland] Chowder gives a taste of the ‘green isle’ 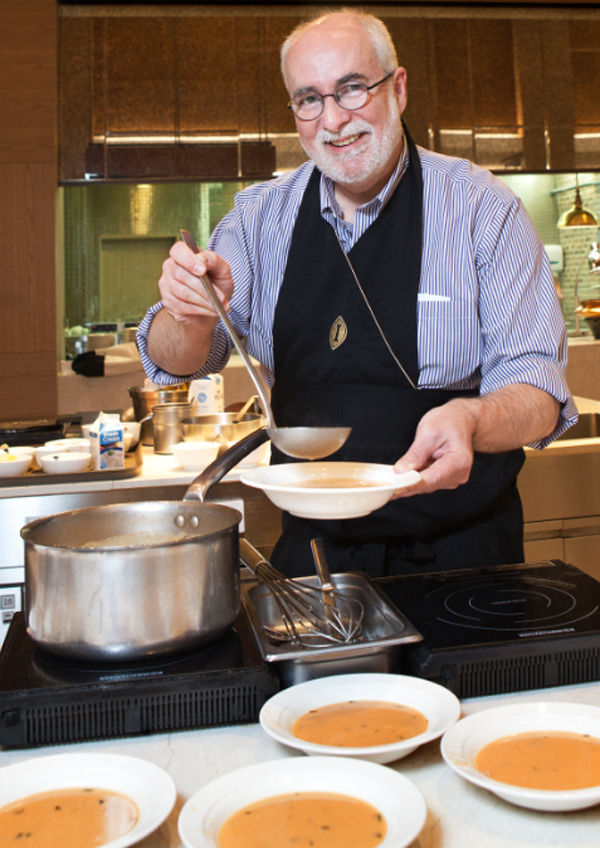 Every great capital has a diplomatic corps representing their countries and promoting their own cultures. Ambassadors are expert entertainers and their spouses are often skilled at introducing the cuisine of their homeland to their foreign hosts. In this series, the Korea JoongAng Daily asks the spouses of Seoul’s ambassadors to introduce our readers to a favorite entree from their homelands. In each installment, her excellency will be joined by a chef from the Grand InterContinental Seoul Parnas who prepares a Korean dish that compliments the foreign offering. Mashitge deuseyo, bainigi taitneamh as bhur mbeile and bon apetit!

Growing up a diplomat’s son traversing the world, Peter Bullen, husband of the Irish Ambassador to Korea Aingeal O’Donoghue, finds tasting exotic cuisines one of the greatest pleasures of exploring a new country.

Bullen explained that he wont let a language barrier stand between him and culinary adventure; when dining out, he relies on “25 very useful Korean words” and Google Translate to place orders at local restaurants.

Even then, he says that he often picks his meals at random. Most of the time this works out well, but he admits that he’s been taken surprised by the spiciness of some Korean dishes.

“If you’re not prepared for it, it can be a bit of a shock!” he says, laughing.

Calling himself an “amateur cook,” Bullen explains he and his wife normally cook twice a week, “experimenting” with different recipes found online, many of which take a few hours to prepare.

Q. Why did you choose seafood chowder as today’s main dish?

A. I have chosen chowder as it is one of my favorite dishes, and one that is found in many restaurants in County Cork, Ireland, where my wife is from. Whenever we're visiting home, I always have chowder several times. There are many different types of chowder. I'd say that each chef will have their own version. While chowder is always served with brown bread, at least in County Cork, it also goes very well with fries - "chips" in Ireland. The recipe that I'm using is from Fishy Fishy, an excellent restaurant in Kinsale, my wife's hometown.

What I really like about this dish, is that a lot of times when you’re cooking with prawns you don’t need the head and shell, so they’re all thrown away - but here, those are used to make the stock, which make the best flavor. It’s another way to use parts of the shrimp that don’t get used often.

What aspect of Korean cuisine can you find in seafood chowder?

Soups and stews are often served in Korea, and of course, chowder is a type of soup. Some Korean dishes use ingredients that are leftovers from other dishes. Chowders are good for that, as you can use small bits of seafood left over from preparing another dish. The recipe I made does this with the prawn heads and shells.

Traditional Irish cuisine can be described as healthy, home-style cooking with lots of stews, homemade breads and potatoes. We even have a very popular black pudding which is like the Korean sundae [blood sausage]. Over the last 30 years, there has been a huge revival in Irish cooking with a focus on our high quality, fresh products. Ireland is sometimes called the “green isle” and we have excellent fresh seafood, finest-quality meats and dairy products, all of which are used by a new generation of innovative Irish chefs.

Koreans can already enjoy Irish seafood and pork on sale here and we hope that they will soon be able to enjoy Irish beef, which is grass-fed and especially succulent and flavorful. At farmers markets around Ireland, people can enjoy delicious artisan cheeses, smoked fish and wonderful baked goods. 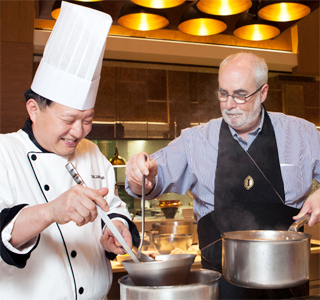 Ireland is famous for its pubs and many also offer great Irish food such as roasted Atlantic cod, Irish smoked salmon, traditional Irish roast beef or bacon and cabbage. Accompanying all the foodstuffs is a creamy pint of Guinness, or one of our famous Irish whiskeys; that’s heaven on a plate!

Most kinds of meat and many vegetables.

Some vegetables like parsnips, turnips and rhubarb; fresh herbs; lamb; and of course, world-famous Irish beef. Frozen lamb is found in Itaewon, and some fresh herbs are spotted at food stores.

What are the best restaurants in Seoul serving your cuisine or a similar one?

There are a number of Irish pubs in Seoul such as Wolfhound in Itaewon, central Seoul; Dublin Terrace in Gangnam, southern Seoul; and Harp Bar in Seongnam, Gyeonggi, where you can get a taste of Irish food and have a fun evening out. In addition, there are a range of special Irish products such as Irish porridge and Irish tea on sale in department stores in Korea.

While I always modify recipes to my own taste, here, I change recipes more, as required ingredients are not always available; so it’s more of making dishes ‘based’ on a recipe instead of just following the recipe. And many times, I can't even try a recipe, but that is an issue anywhere you're not cooking the local cuisine, not just in Korea. These gaps can be surprising. For example, quail eggs are easily found in Korea but not quail themselves, whereas at our last posting, it was easy to find quail but quail eggs not so much.

Please give us your personal observations about Korea, and how it compares to your country or other countries which you have lived.

One of my first impressions of Korea was how advanced it was technologically, but I also gained a sense of Korea's long history and culture from the palaces in Seoul and from visiting Gyeongju soon after arriving. I think this is an exciting time to be in Korea, as the economy and culture move into a new phase, exemplified by the so-called Korean Wave.

The side dishes, taken as a whole, are what make Korean cuisine for me. Among the main dishes, well, a little restaurant near my house makes a thick bean and tofu stew named biji jjigae, and that’s just lovely. There’s also a place near my office that makes a type of chicken stew similar to samgyetang [traditional chicken soup with ginseng], which I like. Furthermore, I've always been fond of squid, and Korean squid dishes are always welcome, even when they’re a bit spicy!

I've done a lot of walking on the Bugak Skyway and on the Fortress Wall of Seoul; they're good areas to get fresh air and great views of Seoul. I’ve also noticed that hiking is very popular among Koreans. In town, the Seoul Art Center is always worth visiting. There's so much going on there, you almost don't need to check what's on; it seems as if there's always something interesting. Aside from those things, I like exploring big cities, so I simply try to go somewhere in Seoul that I haven't been before.

Born in 1959 in Beirut, Lebanon, Peter Bullen holds a bachelor’s degree in accounting from the University of Virginia and a CPA certification. He began working as an auditor after graduation, first in Washington, D.C., and then in Spain. He joined IBM on returning to Ireland in 2003, and still works with the company in Korea.

Ambassador Aingeal O’Donoghue arrived in Seoul in August 2013. She was previously posted in Brussels at the Permanent Representation of Ireland to the European Union, and before that was based in Dublin at the Department of Foreign Affairs, where she worked on various aspects of the Northern Ireland peace process. Previous assignments include Madrid, New Delhi and Washington, D.C. O’Donoghue and her husband , who met during her assignment in Spain, have one daughter who has accompanied them to Korea.