A night at the Seoul Metropolitan Library

A night at the Seoul Metropolitan Library 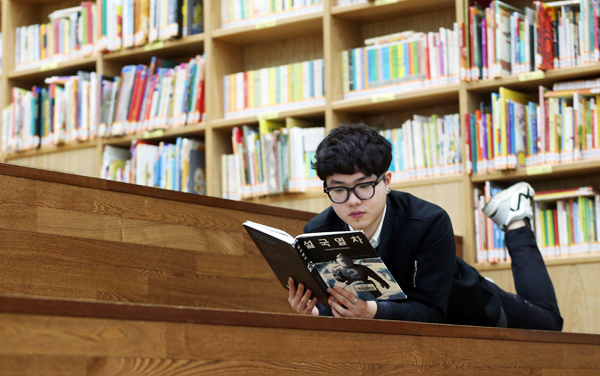 College student Yun Hyung-cheol participates in the JoongAng Ilbo’s library project, in which five participants were locked inside a library and forced to read for 12 hours from 9 p.m. on March 18 to 9 a.m. on March 19. By Kim Sung-ryong

According to the Ministry of Culture, Sports and Tourism, the average Korean spent 9,800 won on books per month as of 2013 - the equivalent to the cost of two cups of coffee.

To put it another way, people could have read more if they had cut down on the java.

But those living in a time-poor, cash-rich society have plenty of excuses for opting away from books.

College students are driven to dog-eat-dog competitions to land jobs while rank-and-file workers, living in one of the most overworking countries, call it a day around 8 or 9 p.m.

Reading has naturally become a luxury for most.

So for that reason, the JoongAng Ilbo, an affiliate of the Korea JoongAng Daily, decided to go to the extreme by locking five young people inside a library for 12 hours and forcing them to read.

The idea behind this unique social experiment was to prove that people might be more inclined to read if they were in an environment that encouraged it and given the time.

The participants read from 9 p.m. on March 18 until 9 a.m. on March 19 at the Seoul Metropolitan Library, located in Jung District, central Seoul, which is home to 280,000 books.

There was just one rule: They had to stay up all night and read.

The following is what transpired over the 12 hours the five participants spent inside the library.

Five people gather at 9 p.m. at the Seoul Metropolitan Library; Seoul Mayor Park Won-soon shares his experiences of reading while imprisoned as a student; Lee Hyun-ji is immersed in a book around 3 a.m.; Yun Hyung-cheol dozes off around 3:50 a.m.; Park Kyung-tae prepares to go to work around 8 a.m. after 12 hours at the library.

Everyone inside the Seoul Metropolitan Library was getting ready to pack up and leave when a final announcement around 8:50 p.m. signaled closing time.

The declaration resonated throughout the building: “Thank you for visiting the Seoul Metropolitan Library. I hope you have a safe journey home.”

The library was completely empty when the five participants entered and introduced themselves to one another.

Yun Hyung-cheol, 20, and Seo Ji-won, 23, who major in mechanical and system design engineering at Hongik University, were first to break the ice.

“I’ve never been to the school library to borrow a book,” said Yun. “This is the first time I’ve stayed up all night reading a book since I was in high school,” he added.

Seo picked up “Paul Smith: A to Z” by Olivier Wicker, which details the life of the British fashion designer, from his artistic philosophy to his personal achievements.

But unlike the other participants, both said they enjoy reading - Lee works as a reviewer for an online bookstore. Most of all, she is fond of fiction.

Her first choice was “Limonov” by Emmanuel Carrere, while Shim chose Korean novels.

“I love novels that are fun to read but not shallow,” Lee said.

Park Kyung-tae, 31, the last participant and the only company employee, just landed a job at Hanssem, a local furniture company.

He wore a suit, having just come from his office, and held a pile of children’s picture books in his hands.

“As I’ve gotten older, I’ve found myself more attracted to something easy and fun,” he said. “I chose these books because the most important thing at work is speaking in plain and clear language.”

About 30 minutes later, the five participants became silent after noticing a familiar face come through the door.

It was Seoul Mayor Park Won-soon.

The mayor dropped by the library after hearing about the JoongAng Ilbo’s project.

The mayor went to prison when he was just 19 years old after joining a student movement.

“I went to prison when I was a college freshman,” Mayor Park said.

“I spent most of my time [in my cell] reading, and all the books [I read back then] are still in my mind. If you gain knowledge easily, it will easily go away,” he added. “But today’s reading experience will be in your mind forever.”

After two hours, the participants appeared immersed in their reading material.

Park had already changed into lounge wear, and Lee wore glasses in place of her contact lenses.

Seo had already finished his first book and grabbed a second about differential equations.

“Since I major in engineering, I try to solve math problems every day.”

Yun, who was sitting in a stiff chair, moved onto a cushioned sofa and took his shoes off. He read laying flat on his stomach.

“It’s a little hard because I hardly read books,” he admitted.

Yun’s short and sharp groan filled the air of the library. He looked at his smartphone.

“I get stressed out whenever I read books because it feels like I’m studying,” he said. “I can get answers right away just by typing in my questions on a smartphone, but I have to read for hours if I want to look up the information I need. In that way, reading is inefficient.”

Park, meanwhile, had finished all the children’s books and moved on to linguistics books.

And Park, who was nodding off, sprawled out on the stairs located between the first and second floors of the library. He was attempting to stay awake by reading a book about film.

“This one is less boring because it has a lot of photographs,” he said.

Day began to break and the sun’s rays penetrated the library’s windows. The cleaning staff began their morning ritual, starting off by mopping the floors.

Shim and Lee, who had read far more over the night than the other participants, went to the bathroom and didn’t emerge again for some time.

“My bangs are greasy,” Shim said as she began to adjust her makeup.

In the final hour, Lee Yong-hoon, the director of the Seoul Metropolitan Library, showed up.

“This is the first time in my life I’ve read two books in a row,” Yun answered.

“It wasn’t easy, but I want to visit a library again,” added Seo, Yun’s college friend.

Lee, who had morning classes, lamented, “I feel sick because I stayed up all night.”

Park, who had to go to work, also sounded tired.

“I’ve come to realize why reading is important,” he said, “but I don’t think I want to read any books for a while.”