China’s ‘peaceful’ pledge to the world

China’s ‘peaceful’ pledge to the world 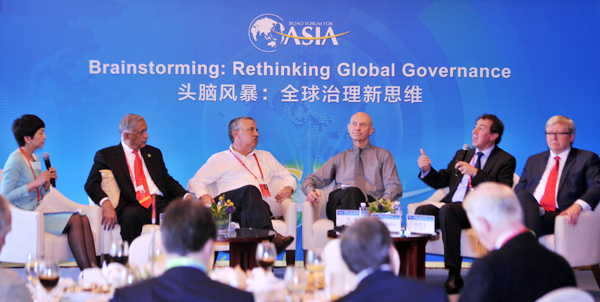 Thank you for kindly guiding a foreign reporter through various situations in China. Here in the remote fishing village that used to be a place of exile in the ancient kingdom, I have once again felt the “power of China.”

It is a power that brings international dignitaries and leading businessmen to Bo’ao in Hainan Province. China’s interests and future, which was once rather vague in the media, has now became more tangible. No one would deride the Bo’ao Forum as a fake Davos.

The highlight of the forum was President Xi Jiping’s keynote speech. With composure and confidence, Xi explained China’s vision and ambition to integrate Asia. But what impressed me most was the repeated emphasis on having a peaceful relationship with other countries. “China’s determination to pursue peaceful development remains unchanged. ... Whether a country is big or small, all nations are equal in the international community. ... China would not ask other countries to go through the tragedy it experienced in the past.”

He used nearly half of his speech to elaborate on this pledge, mentioning “peace” 19 times and “partnership” 30 times. Repeating the same word or phrase can bore an audience, and it is not the best speech tactic.

But why did he stress peace and partnership so many times? China knows how other countries look at its recent emergence. Xi was appealing to a world that remains suspicious, even though China has repeatedly declared it would not pursue hegemony. He is basically asking, “Do you still not believe in China?”

As China’s national strength grows, its role and voice is expanding as well. As we have seen from China’s push with the Asia Infrastructure Investment Bank (AIIB), there is little it cannot achieve. Some have criticized its way of promoting its position and doing business as overbearing.

One foreign reporter said, “Let’s look around. Since Xi Jinping was made president of China, is there any country whose relations with China have improved? Korea may be the only exception.”

But even among Koreans, some have argued that China has changed. Being in such close proximity, there are a number of sensitive issues.

I would like to interpret Xi’s address as a pledge. He is not asking the world to trust China’s peaceful development but is making a resolution to himself that he will pursue that direction. The power of words is that once you say something, there is no taking it back.

Once again, thank you for your insight and assistance. I would like to see you back in Beijing.