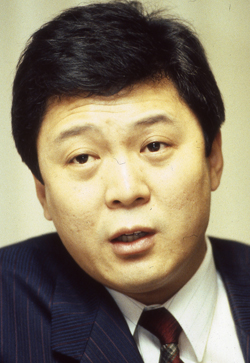 Jang Jin-ho, former chairman of soju producer Jinro Group, died of a heart attack in his house in Beijing on Friday, according to the Korean Embassy in the Chinese capital and his friends. He was 63 years old.

Jang was found dead at his residence in Chaoyang District in downtown Beijing on Friday morning. His aides said he had been complaining of indigestion for two days. Before going to sleep the night before, he said something went wrong with his insides.

Jang’s wake was held at a hospital in Beijing before his funeral on Sunday.

The former chairman of what was once the nation’s 24th-largest conglomerate with annual revenues that peaked at 3.5 trillion won ($3.2 billion), has a storied past.

Born as the first son of Jang Hak-yeop, who founded Korea’s oldest soju company in 1924, Jang Jin-ho was made the second chairman in 1988 and spearheaded an aggressive expansion.

He advanced into the retail industry in 1987 and joined forces with Coors of the United States in 1992 to come up with the household beer brand Cass in 1994. The number of Jinro subsidiaries once reached 24.

But the 1997-1998 Asian financial crisis brought Jinro low and a credit crunch pushed it into liquidation. The group was shattered in court receivership as it sold subsidiaries to pay off debts.

Jinro Coors Beer was sold to Oriental Brewery in December 1999 and Jinro Ballantines, a joint venture with U.K.-based Allied Domecq, was later merged with a Korean subsidiary of Pernod Ricard Group.

Jinro’s soju unit, which owned the signature “Chamisul” brand, was taken over by a consortium led by Hite Brewery in 2005 and the two units officially merged in 2011 to launch the current Hite-Jinro Group with 19 subsidiaries.

Jang was fired in May 2003 and was arrested four months later for dereliction of duty. He was later sentenced to prison for two and a half years. He went to Cambodia after his release in 2005.

Sources say he ran a bank for Koreans and dabbled in real estate in the Indochinese country and relocated to China in 2010 with a Cambodian passport.

Jang was about to launch a new business in Beijing before he died. People close to him say he deplored the rampant misunderstandings about him.

In 2013, he pressed charges against one of his executives at Jinro claiming he embezzled 400 billion won. He once told a newspaper that he intended to return to Korea if circumstances allowed.

“I left everything back home and it has been untruthfully claimed that I pocketed enormous sums of money,” he said in the interview.