Korea’s back on top in shipbuilding

Korea’s back on top in shipbuilding 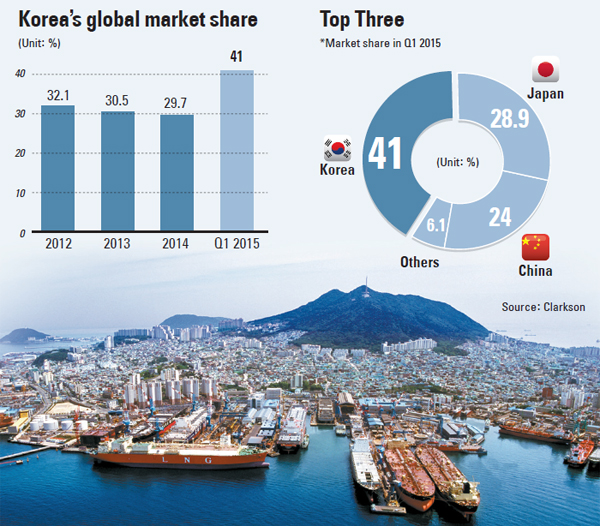 Korean shipbuilders outpaced their Chinese and Japanese rivals to reclaim the top spot in terms of new orders received in the first three months of the year, according to the world’s largest shipbroker, Clarkson, on Sunday.

This is the first time since the first quarter of 2012 that Korean yards repositioned themselves as No. 1. The world’s shipbuilding industry has traditionally been dominated by Asian players: Japan, Korea and now China.

Clarkson said world shipbuilding orders totaled 5.62 million compensated gross tonnage (CGT) in the first quarter, down by almost two thirds from the same period a year earlier, which it was 16.19 million CGT. When the volume is translated into the number of ships ordered, orders placed in the first three months of this year plunged by 74.6 percent year on year.

Korean shipbuilders’ return to the top is in part due to the fact that China has been struggling with continued low demand for dry bulk carriers, its key product. China buys almost half the world’s coal and ore, which those ships are used for. Its economy is expected to grow 7.2 percent this year, the slowest pace in 25 years.

The Barack Obama administration’s recent nuclear deal with Iran is expected to have a positive impact on the Korean shipbuilding industry, according to analysts.

If imports of Iranian crude oil and chemical products grow, the volume of goods traded between Korea and Iran is projected to increase. Expectations are high that it will lead to the virtuous cycle of a higher demand for vessels.