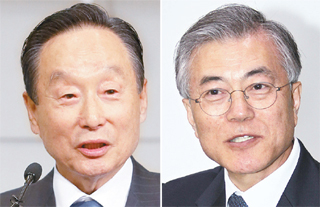 A meeting between opposition party leader Moon Jae-in and Kwon Rho-kap, a veteran confidant of the late President Kim Dae-jung, was cancelled at the last minute, clouding the opposition’s plan to use the occasion to shore up support from the pro-Kim group.

Moon was scheduled to have a meeting with Kwon and other retired lawmakers who had close ties to former President Kim at 9 a.m. Sunday in an effort to win support for candidates running in the April 29 by-elections.

But less than an hour before the meeting, the New Politics Alliance for Democracy announced the meeting was cancelled.

NPAD Chairman Moon tried to downplay the cancellation, saying the meeting would be “rescheduled.”

The NPAD tried to hold a meeting with Kwon and other members of the pro-Kim Dae-jung faction, known as the Donggyodong-faction for a neighborhood the former president lived in, to show voters that the party leadership has support from the faction.

With the meeting’s last minute cancellation, speculation grew that the Donggyodong-group views Moon as not doing enough to embrace faction members, many of whom served in the Kim Dae-jung government.

The pro-Kim faction is allegedly unhappy with the current NPAD leadership because it thinks its members have been excluded from key positions in the party under Moon. Some pro-Kim members are said to view the NPAD’s courtship as pure electioneering and not a sincere embrace.

Kwon expressed his wish to support opposition candidates, but it remains to be seen how strongly he will encourage other pro-Kim group members to help Moon in the campaign.

The cancellation came as a disappointment to the NPAD leadership, especially to Moon, given the grave state of its campaign for the April 29 by-elections. The party is even struggling in two of its traditional strongholds in Gwangju and Seoul.

In Gwangju, Cho Young-teck of the NPAD is trailing Chun Jung-bae, a well known politician who served as justice minister during the Roh Moo-hyun government. Chun is running as an independent. In a poll by the JoongAng Ilbo of 600 adults in Gwangju, Chun was leading the race with 28.7 percent support trailed by Cho with 22.8 percent.

In Seoul’s Gwanak B District, another opposition stronghold, the NPAD may lose to the ruling Saenuri Party for the first time in 27 years.

In the same poll, Oh Shin-hwan of the ruling party came on top with 34.3 percent in Gwanak B, trailed by Jung Tae-ho of the NPAD with 15.9 percent and Chung Dong-young, who left the NPAD last year, with 13.3 percent.

If the NPAD loses both races, it will deal a big blow to Moon’s leadership and raise questions about his efforts to embrace factions other than his own pro-Roh Moo-hyun group. The NPAD is known for being divided along factional lines.