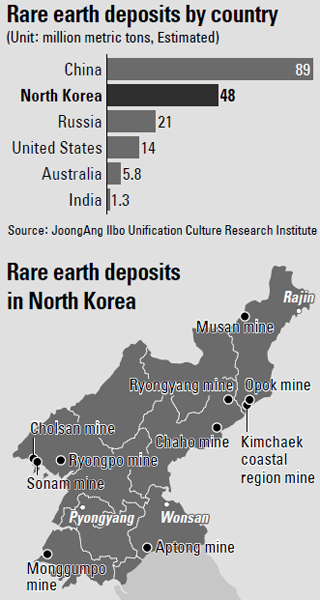 
A number of countries are interested in mining underground resources from North Korea.

China, Russia as well as Britain and the United States all have their eyes on the reclusive state’s natural resources. Japan, in particular, has actively paid attention to the rare earth elements available in the country.

Rare earth elements are essential raw materials that can be used to make components for cell phones, computers, cars and generators due to their outstanding geochemical properties. In fact, these elements are often referred to as the vitamins of the tech industry.

As ties between China and Japan have progressively soured over the past few years, Tokyo has increasingly turned its eyes toward North Korea’s natural resources.

Japan imports 56 percent of China’s rare earth exports, and if its ties with Beijing go completely awry, its high-tech industry would be directly affected by the potential loss.

Those concerns came to fruition in September 2010, when a territorial dispute over the Senkaku Islands, also known as the Diaoyutai in Chinese, came to a head.

After Japan detained a group of Chinese fishermen trawling near the Senkaku Islands, Beijing lodged a complaint demanding their release. Six days later, Tokyo let go 14, but continued to hold the boat’s captain.

Only then did Japan release the detained captain, a mere three days after China drew the “rare earth” card.

The case exemplified the meaning behind Chinese leader Deng Xiaoping’s words from 1992, when he remarked, “If the Middle East has crude oil, then China has rare earth.”

Since then, Japan cannot help but diversify its channels for importing rare earth elements. As Japan searched for a more secure supply of rare earth minerals in Vietnam, Kazakhstan and Estonia, it eventually locked its sights on North Korea. At the time, North Korea did not hold much interest in its rare earth deposits.

It had been aware of the value of rare earth minerals since the 1980s, but couldn’t even begin to conceive of the idea of monetizing them simply due to the large-scale equipment required to dig out the underground deposits.

But the increasingly heated territorial dispute between Japan and China opened North Korea’s eyes to the opportunity present to it.

After conducting an analysis with geologists from Australia, the Research Bureau of North Korea’s National Resources Development Department announced on March 23 that 216 million metric tons of rare earth were buried in the nation’s soil.

The Research Bureau boasted of the rare earth deposit, saying “it is a monolithic reserve, especially when taking into consideration that the consumption of rare earth over the globe in 2010 was just 140,000 metric tons.”

However, it’s difficult to believe North Korea’s announcement, especially because it did not conduct field studies and merely estimated the quantity. “In North Korea, only a tiny amount of rare earth is included in various minerals,” a South Korean official familiar with the situation said. “Forty-eight million metric tons of rare earth are presumed to be economically feasible.”

But even that amount means it is the second-largest rare earth reserve when compared to China. China is presumed to have 89 million metric tons of rare earth elements.

China removed the quota system for rare earth exports, according to the resolution by the World Trade Organization (WTO) in January, but maintains tight control over the production of rare earth minerals, having applied stricter environment regulations on production facilities.

Mining rare earth deposits produces not only fluoride, but also radioactive substances such as thorium. Because a large amount of chemical fuel is used in processing minerals, pollutants such like gas, sulfur oxides and sulfuric acid are also emitted.

Russia invested in developing those rare earth mines when it embarked in October to repair North Korea’s inland railway systems, part of a joint venture with a North Korean company.

The late leader Kim Jong-il had favorable impressions of Japan, though relations between the two countries are currently tense in large part due to issues surrounding the regime’s abduction of Japanese citizens decades ago.

Kim had a strong interest in Japan since he was young because his mother, Koh Young-hee (1953-2004), was among the population of Koreans residing there.

But North Korea’s options now are limited and its allies dwindling.

But South Korea does not appear to have any interest in developing rare earth minerals with the North, particularly with ties as tense as they are, though the South Korean government did push to develop a rare earth mine in 2011, in Pyonggang County, Kangwon.

The South Korean government has considered the gains and the losses associated with importing processed rare earth minerals from Japan and jointly investing in rare earth mines in North Korea with equipment purchased from Japan.

China pays close attention to rare earth exports from North Korea, and it is not pleased to see that North Korea could be a new supply line for Japan, forcing it to lose leverage.

So China has now opted to import rare earth minerals from North Korea in small quantities. According to statistics released by the Korea Foreign Trade Association, North Korea rare earth exports to China last year added up to about 60 metric tons.