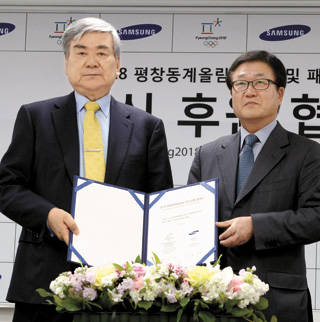 The Pyeongchang Organizing Committee for the 2018 Olympic and Paralympic Winter Games (Pocog) has signed a local sponsorship deal worth 100 billion won ($92 million) with Samsung Group on Monday, as the organizers hope the deal with nation’s top conglomerate will spark sponsorship deals with other companies.

Samsung Group chief Lee Kun-hee, who is currently hospitalized, serves as a member of International Olympic Committee (IOC). The chaebol already serves as global sponsor for the Olympics through The Olympic Partner (TOP) program, but the deal signed on Monday is a local sponsorship specifically with Pocog.

Samsung, which has been the global wireless communications sponsor through the TOP program since the Nagano 1998 Olympic Winter Games, recently extended its contract until 2020. The organizers said that in terms of global sponsorship, Samsung is limited to the IT sector, but in the local sponsorship deal, it can utilize its other affiliates.

Samsung Electronics, the flagship division of Samsung Group, will provide electronic devices such as printers and computers and will also finance various events. The organizers said that other affiliates, like Samsung Life Insurance, Samsung Fire & Marine Insurance, and Samsung Securities, will also provide support.

Cho said the deal with Samsung will “encourage” other local companies to also sponsor the games. So far, Pocog said it has signed a total of six domestic sponsorship agreements with Samsung Group, Korean Air Lines, KT, Youngone Outdoor, Pagoda Education Group and Samil PricewaterhouseCoopers, and has achieved 41 percent of its sponsorship target.

“But we aim to reach 70 percent by end of this year,” said Kwak Young-jin, secertary general for Pocog.

The sponsorship deal was one of the issues that Pocog and the government have been focusing on. Even President Park Geun-hye urged local conglomerate chiefs in February to help Pocog through sponsorship. Since then, the Federation of Korean Industries, an industry group that represents conglomerates, has formed a task force on the Olympic sponsorship.

The sports community is now eying the nation’s second-largest conglomerate, Hyundai Motor Group, to join the local sponsorship deal after Samsung. Japan’s Toyota last month joined the TOP sponsorship in the “mobility” category, which made some worry about Japanese cars serving Olympics officials in Pyeongchang. However, the IOC and the organizers said that Hyundai Motor can always join as the local auto sponsor and provide their cars in the events.