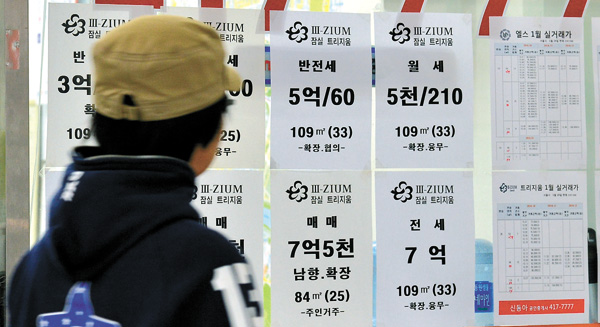 The government will lower interest rates for government-backed mortgage programs for low-income households to help ease financial burdens, the Ministry of Land, Infrastructure and Transport said on Monday.

The ministry’s announcement followed growing complaints from the low-income households that were excluded from the popular Anshim Jeonhwan Daechul refinancing program designed by the Financial Services Commission (FSC), which helped as many as 345,000 households with expensive mortgages switch to cheaper loans at a time when the benchmark interest rate was at a record-low of 1.75 percent.

The Land Ministry said it will cut the interest rate of Beotimmok Loan, a ministry-designed program for housing deposits, from the current range between 1.7 percent and 3.3 percent to 1.5 percent and 3.1 percent from April 27.

The interest rate of the Didimdol Loan, a program for purchasing houses, will be lowered from between 2.6 and 3.4 percent to between 2.3 and 3.1 percent. The rate of the Wolse Loan for monthly rents will be slashed by 2 percent to 1.5 percent. 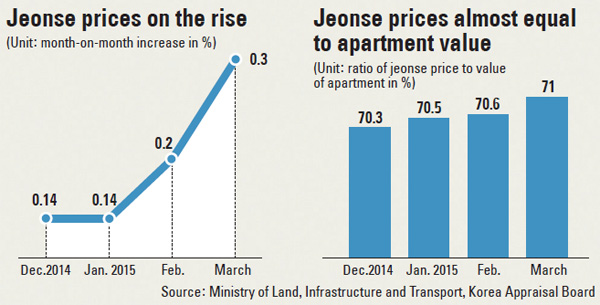 The government loans are confined to households whose combined annual incomes do not exceed 40 million won ($36,800) a year and who do not own a home.

“While the real estate sale market is showing some signs of recovery, the lease market is still showing uncertainties due to an imbalance between supply and demand, and rising jeonse [long-term deposit] prices,” said a Land Ministry official. “Amid the low interest rate, the latest plan will help working-class people reduce the burdens of borrowing for housing.”

Separately, the FSC is preparing to announce a tailored mortgage program for people with lower annual incomes and credit levels. While the Land Ministry is devising comprehensive plans to help people reduce living costs, the financial authority is in charge of micro financial policies such as the Anshim Jeonhwan Daechul.

A total of 345,000 applications were filed for the newest program, which includes 33.9 trillion won worth of mortgages at fixed interest rates between 2.55 and 2.6 percent, in the first and second rounds over the past two weeks. There has been a high demand for mortgage refinancing from people who borrowed to buy properties from so-called secondary financial institutions, such as savings banks and credit companies, which have higher interest rates.

According to a JoongAng Ilbo exclusive story on Monday, the financial regulator is planning to expand the existing government loan for deposits on public apartments built by state-run Land & Housing (LH) Corporation from the current ceiling of 10 million won to 20 million won in response to the high demand from the working class.

The government’s financial arm is also considering lowering the interest rates of its loan programs created for low-income households by two percentage points.

Another possible measure considered by the commission is to force private credit companies known as “loan sharks” to slash interest rates from the current maximum of 34.9 percent to below 30 percent.

The FSC denied the details of the story that haven’t been confirmed.

Earlier, Ahn Jong-beom, senior presidential secretary for economic affairs, said on April 1 that the government will seek measures to expand existing programs for the excluded households, or even design new ones.

“The FSC will announce micro-level measures in a comprehensive policy package soon,” the secretary said.

The newspaper said one of primary measures is to increase the government’s support for loans that are currently being issued to those considered to be in the low-income bracket or with credit levels below seven. They now receive 10 million won in loans that will be used for deposits of leased public housing units at an interest rate of 2.5 percent. The FSC is considering expanding the amount to 20 million won as a possible measure to help the working class. At present, the loans are given to residents of LH Corporation-built apartments only, but the financial regulator is also reviewing a plan to expand eligible borrowers to those who live in public apartments built by SH Corporation, a public housing provider run by the Seoul City government.

Data from the Land Ministry shows that 91,000 households are living in public apartments constructed by SH as of late 2013.

The FSC is also reviewing interest rates for the loan programs created by the commission such as the Haetsal Loan and Bakkuadeurim Loan, which also convert higher rates to lower fixed rates, from the current 8 to 12 percent to 6 to 10 percent.