Head of KTO steps down from position

Head of KTO steps down from position 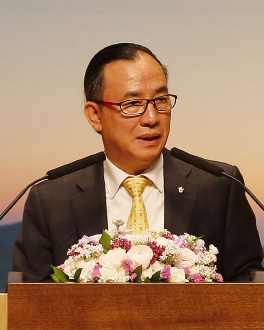 
Korea Tourism Organization CEO Byun Choo-suk delivered a speech Monday after stepping down from the top position on Saturday. His resignation came just a year after he took office, although he was appointed to head the public company for three years.

“I have put in everything I have, and each and every day was dedicated to the organization,” said Byun during the retirement ceremony at the company’s new office in Wonju, Gangwon.

“Of course it wasn’t easy. As I became an insider I saw many difficulties I didn’t get to see from the outside.”

Without giving a specific reason for his departure, he said he’s sorry to leave the projects he started behind.

The state-run company refused to comment on whether the CEO had some trouble working with the Ministry of Culture, Sports and Tourism.

“There have been reports about the issues, but we have nothing to comment on, and the CEO himself also neither denied nor confirmed,” said a source from the Korea Tourism Organization.

“But more broadly speaking, when you try to work with others, there could be some trouble, and difficulties rise in the process.”

On Friday, the Culture Ministry distributed a press release reporting that Byun had expressed a desire to resign since last year due to health issues but that Minister Kim Jong-deok stopped him. The ministry said Byun was persistent about resigning and that it finally accepted.

During his time in office, Byun launched a new tour slogan for the country, “Imagine Your Korea,” in July to attract more global attention.

Byun did not specify his next step, but it is expected that he will go back to teaching. He was formerly a professor at Kookmin University in Seongbuk District, northern Seoul.