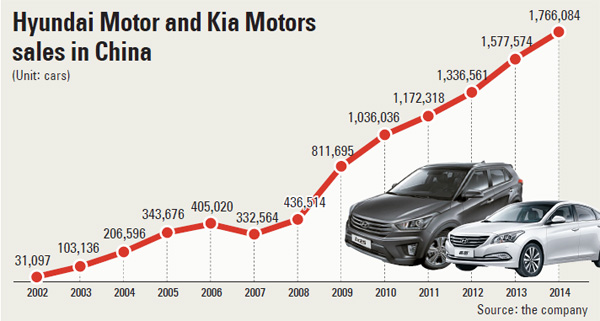 The number of cars sold in China by the nation’s two auto giants - Hyundai Motor and Kia Motors - exceeded 10 million units, a feat that took a mere 13 years.

That is the fastest route to 10 million units sold by any foreign automakers. General Motors took 17 years to reach that milestone and Volkswagen took 25.

Volkswagen is the top-selling brand in China, the world’s largest car market, and GM is No. 2.

In terms of 2014 sales, Hyundai Motor and Kia Motors together were the third biggest foreign automaker in the China market.

Hyundai Motor said Monday that it and its sister company Kia Motors have sold a total of 10,000,776 units in China as of Friday, reaching the 10 million mark only seven months after it sold 9 million units in September of last year. China is the third country in which the two have sold more than 10 million cars, after Korea in 1996 and the United States in 2011.

One of the reasons that the two were able to reach the milestone in less time than their rivals was their ability to match their sales strategies with the needs of Chinese consumers. After establishing Beijing Hyundai as a joint venture with state-funded Beijing Train in 2002, Hyundai Motor started selling the mid-size EF Sonata (Ming Yu in China) and Avante XD (Elantra in China) that December, becoming the fifth-largest company in China in terms of sales by 2004 and ranking fourth the next year. Such achievements even created the new phrase “Hyundai Speed” in the Chinese industry, referring to rapid growth.

The Elantra Yue Dong, the company’s first model developed exclusively for China, was also a success, selling 85,957 units during its first year on the market in 2008. The model exceeded accumulated sales of 1 million units by 2013 to become a best-selling sedan for the company.

The company is introducing more China-only models, such as the mid-size sedan Mingtu and small-size SUV ix25. The Mingtu was a big hit last year among China’s mid-size sedans, with a market share of 4.8 percent and 134,997 units sold. The company is currently targeting younger consumers in their 20s and 30s with the ix25. The company said China’s compact car market was almost half of the nation’s entire car demand last year, with 8.06 million units, or 47.4 percent of the total. It increased by 37 percent from a year earlier when it marked 3.96 million units, or 23.3 percent of the total.

Kia Motors also established a joint venture, Dongfeng Yueda Kia, in 2002 and started selling Tien Lima, which is the Accent in Korea. Though it was a small sedan, the price offered in the Chinese market was over 15 million won ($13,874), higher than its Korean price, as it included many options unavailable in Korea because Chinese consumers like fancier cars.