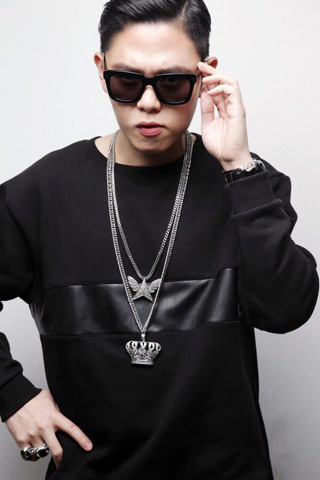 
Rapper Zo PD broke new ground in the early 21st century by releasing his music for free in cyberspace and for being the first singer in Korea to have his songs censored.

In 1999, when the Internet was still not completely commonplace, the musician released his debut album, “Zo PD In Stardom,” via MP3 files online.

Many of the tracks expressed his aggressive anger towards society.

Zo earned the nickname “cyber singer” because he refused to show his face to the public but was highly active on the web.

However, the maverick singer, who represented a rebellious attitude at the time, began to sing about hope, friendship and consolation through hit songs such as “Friends” and “Candy.”

A few years ago, he built his own music agency Stardom Entertainment and produced idol groups such as Block B and Topp Dogg.

Last month, the 39-year-old released the mini-album “Golden Goose Part 1.” However, Zo said that instead of telling his own story, the album instead zones in on the young singers he mentors, in a recent interview with Ilgan Sports, an affiliate of the Korea JoongAng Daily.

Q. Seventeen years have passed since you first caused a sensation in the hip-hop scene. How do you feel about that now?

A. It was such chaos then. I think it was the timing that helped me. I was producing the image that society wanted. Even though I wasn’t fully prepared, I was just satisfied to generate a tangible outcome. Now that time has passed, I think aging does more good to you than bad. I can enjoy the moment more because I see the world from a wider perspective.

Are you more of a producer or a rapper?

I was never interested in making my own music. Since I lacked resources I had to make myself commercial. Having done that for a long time I am finally at a stage where I can do what I want.

There’s a chance that an artist who runs a company can dominate it too much. Is this true for you?

I don’t consider myself to be assertive. I monitor everything, but at the same time I listen to what other staff members say.

What is the objective of your company?

I see SM Entertainment as a role model for our company. While it’s inevitable that an organization becomes bureaucratized when it gets bigger, SM Entertainment is still maintaining its vitality. When I saw its latest project, Red Velvet, I thought that the group was very innovative and fresh.

Do you plan to only create hip-hop groups?

I don’t intend to make an avatar of myself. I established the company to support those who just want to make music.

Do you think crafting an idol group is meaningful when Hallyu [the Korean Wave] is losing ground in foreign countries?

It’s true that Hallyu is not in its heyday, but it comes down to the group’s capacity in the end. There have been so many cookie-cutter groups that have not had their own characteristics. But when the market isn’t in a good state it’s an opportunity to sort out who really has what it takes to be on the global stage.