Lincicome wins the first LPGA major of the year

Lincicome wins the first LPGA major of the year 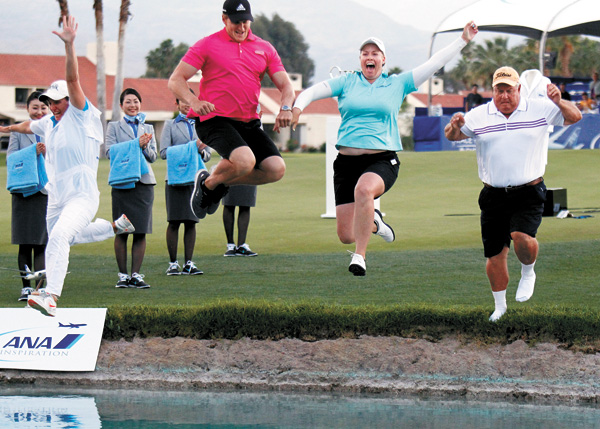 Lincicome eagled the par-5 18th in regulation to pull even with Lewis before finally prevailing in the playoff to win the LPGA Tour’s first major of the year.

Lewis had three chances to win on the 18th, but missed birdie putts from 13 feet in regulation, 15 feet on the first extra hole and 12 feet on the second.

Playing a group ahead of Lewis, Lincicome made a 10-foot eagle putt to match Lewis at 9-under 279.

The long-hitting Lincicome, who also won in 2009 when the tournament was known as the Kraft Nabisco Championship, finished with a 69.

Lincicome lost a playoff to Inbee Park last year in the LPGA Championship, one of the tour’s five majors. The 29-year-old golfer, a six-time winner on the LPGA Tour, is projected to jump from 18th to sixth in the world.

Two strokes ahead of playing partner Kim Sei-young of Korea and four ahead of Lincicome with five holes left, Lewis missed a chance for her third major title. She has 11 LPGA Tour victories and 18 runner-up finishes, three in seven starts this year.

Morgan Pressel was third at 8 under. Kim, three strokes ahead of Lewis entering the round, had a 75 to tie for fourth at 7 under with Carlota Ciganda (68) and Anna Nordqvist (69). Kim had only one par on the back nine, on the 18th when she needed an eagle to get into the playoff.

Lexi Thompson was 6 under. She finished birdie-eagle for a 70.