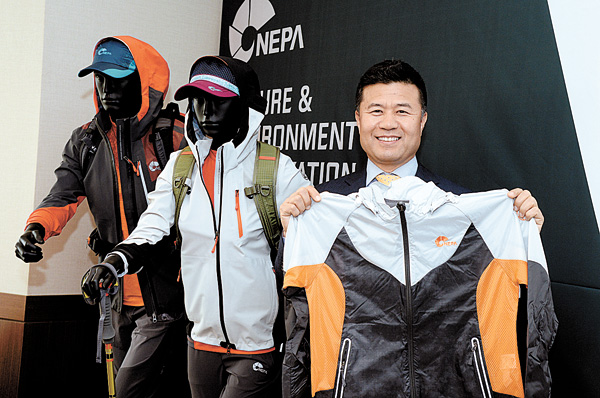 Park Chang-geun, Nepa’s President, holds up the company’s latest windbreaker before announcing a 2020 vision at Lotte Hotel in downtown Seoul on Monday. [NEWSIS]

Faced with wilting demand for outdoor gear in Korea, domestic brand Nepa said that it will push out of the local market and expand its business portfolio abroad, investing some 290 billion won ($267.96 million) by 2020.

The plan came as Korea sees stagnant sales growth at major outdoor product companies following the salad days of the early 2000s through the early 2010s. Momentum fizzled last year and combined sales of outdoor brands remained the almost same as the pervious year at 6.9 trillion won. The local market was saturated.

Nepa is trying to meet the challenge by expanding overseas. The investment will primarily go towards opening stores around the globe with a sales target of 1.3 trillion won in 2020, the label said on Monday.

As part of the expansion plan, Nepa’s first overseas flagship store will open in Chamonix, France, in July. The company said that the store will serve as a springboard into European countries.

The company also plans to expand distribution in China after it launches stores in Beijing and Shanghai. The outdoor wear manufacturer will open 500 outlets by 2020, according to the company.

Nepa will extend its product line by introducing more kids’ gear, too.

As for the speculation that outdoor brands face dim prospects, Park played down that view.

“This is very common and essential for many industries and after this period, the outdoor industry can constantly evolve,” he said.

Nepa has gained a devoted following among climbers and developed into a major outdoor brand in Korea.

The brand gained popularity in the early 2000s as mountain climbing grew into a popular national pastime.