Left: Lexus’ RC 350F Sport. Top: New Mercedes AMG GT. Right: New X4 xDrive30d and BMW’s i8. These are some of the imported brands that are being displayed at the Seoul Motor Show held at Kintex in Goyang City, Gyeonggi, that opened last week and runs through Sunday. This year some 350 vehicles from 32 brands are being viewed by visitors. Thanks to various factors including FTAs and the weaker euro, which have helped European brands offer larger and more aggressive discounts, sales have been on a continuous rise. [NEWSIS]

Monthly sales of imported autos hit an all-time high in March, the Korea Automobile Importers and Distributors Association (Kaida) said Monday, thanks to a series of discount promotions.

Kaida said a total of 22,280 imported cars were registered last month to break the previous monthly sales record of 19,930 units set in January. The number is also a 41.6 percent rise from 15,733 units sold a year ago.

Total sales for the first quarter of the year was 58,969 units, a 32.7 percent rise from a year earlier. 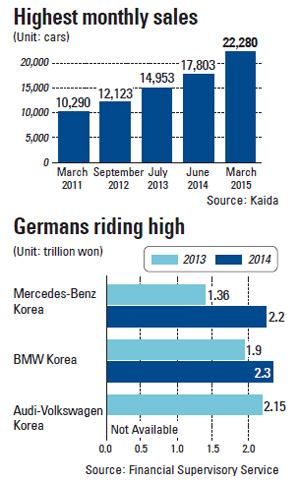 The sales were led by German brands BMW, Mercedes-Benz, Audi and Volkswagen, which held a series of discount promotions in the last few months prior to the implementation of Euro 6 emission standards in September.

BMW became the most popular brand in the country for the first time this year by selling a total of 4,003 units in the month after offering a no-interest monthly installment plan and a 20 percent discount for corporate buyers.

Audi offered a 20 percent discount promotion on its A6 sedan, which will soon get a makeover, and it was the second most popular brand with 3,895 units registered. The company’s A6 35 TDI was ranked at second in sales with 805 units sold, followed by the A6 45 TDI Quattro with 792 units sold.

Mercedes-Benz was third with 3,639 units sold, followed by Volkswagen with 3,264 units. Last year’s best-selling model among imported cars, the Volkswagen Tiguan 2.0 TDI Bluemotion, once again became the best-selling car in the month with 1,046 units sold thanks to no-interest monthly installment plans and zero down payments.

This could be a serious wake up call for domestic automakers as the combined sales by foreigners are similar in size to some Korean automakers such as Ssangyong Motor, the nation’s smallest car manufacturer.

According to an audit report that Mercedes-Benz Korea submitted to the Financial Supervisory Service, the company set an all-time high sales record in the country of 2.2 trillion won ($2.0 billion) last year, a 62.03 percent rise from 1.36 trillion won a year earlier. Its operating profit of 122.2 trillion won last year was 188 percent that the previous year’s 42.3 billion won, and net profit also increased 180.6 percent from a year earlier to hit 96.8 billion won. Unit sales rose 42.1 percent from last year’s 24,780 units to 35,213 units thanks to some popular models such as the E-Class sedan.

Mercedes-Benz sales in Korea were only about 1 trillion won short of Ssangyong Motor’s 3.32 trillion won last year. Benz was far more profitable than Ssangyong, which had a 76.9 billion won operating loss last year.

The Korean company sold 141,047 units last year, an average of 11,753 units per month, which is fewer than combined sales by European automakers that sold 17,951 units last month. Renault-Samsung, the fourth-largest Korean automaker, had 3.3 trillion won in sales last year.

BMW Korea also had 2.3 trillion won in sales and 25.7 billion won in operating profit, which rose 20.6 percent and 121.8 percent from a year ago, respectively.

“The imported car market in Korea is expected to get bigger every year since foreign cars are no longer products that only rich people can afford,” said BMW Korea CEO Kim Hyo-jun when he announced the company’s performance for last year. “The average age of buyers will get lower and the number of cars with engine displacements of 2,000 cc or under will also increase.”

Yoon Dae-sung, an executive of Kaida, said, “The sales by foreign companies might even increase more until the Euro 6 standards go into effect in September as the companies are expected to introduce more discounts.”