Comical Mozart opera to be staged in Korea

Comical Mozart opera to be staged in Korea 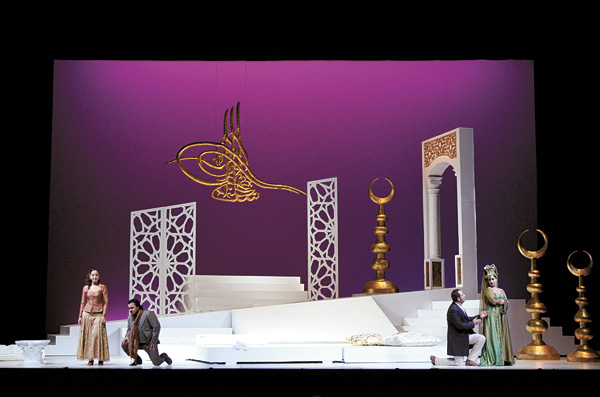 The Directorate General of State Opera and Ballet in Turkey perform “Die Entfuhrung aus dem Serail” during the Daegu International Opera Festival in 2011. The Korea National Opera will stage this Mozart opera from Thursday. Provided by the organizer

Opera performances in Korea err somewhat on the European side in terms of their influence. As a result, the Korea National Opera says the upcoming show “Die Entfuhrung aus dem Serail,” (also called “The Abduction from the Seraglio” in English), known for its Oriental influence, will fascinate classical music fans here.

Written by W.A. Mozart, “Die Entfuhrung aus dem Serail” was inspired by the propensity for Oriental culture that swept across Europe when the Ottoman Empire gained power in the late 18th century. Set in Turkey, this comical opera, according to the Korea National Company, is the “most Mozart-like” opera.

“It’s said that Mozart revealed his thoughts and fantasies on love and romance .?.?. in this piece that’s based on the seraglio where Turkish concubines live,” said the opera company in a press statement.

“Konstanze was the name of Mozart’s real wife and he used the name in the opera for the beautiful protagonist. As for the male protagonist Belmonte, it’s said that he has similar characteristics to Mozart himself.”

The opera is a Singspeil, which is a German opera. Such a genre has much dialogue, which is completely separate from the performance’s arias. As the dialogue needs to be carried out in German, it is known to be a challenge for foreigners.

But in the upcoming show, soprano Park Eun-joo and tenor Daniel Kim, who have both performed in Germany, are taking on the roles of Kostanze and Belmonte.

The challenge, however, is the “Martern aller Arten.”

This aria is the most famous in the opera. It is sung by Kostanze and has been dubbed the “torture aria.”

“This aria is a challenge for all sopranos,” said Park.

“But I like challenges. I think there’s no charm in this genre of performing arts if there are no challenges.”

Park said it is important for her to keep healthy in order to sing the aria.

“I don’t do anything but eat, sleep, exercise and practice for the performances. I don’t spend time talking to friends on the phone or anything like that,” said Park.

“A singer won’t be able to sing this aria if the singer is even slightly not herself.”

The performance is directed by Yona Kim, who will be making her debut in Korea. She has previously worked as a conductor in Germany and Europe. The Prime Philharmonic Orchestra will take care of the music under the baton of Andreas Hotz.

There will be five performances in total at the CJ Towol Theater of the Seoul Arts Center in southern Seoul. They start at 7:30 p.m. on Thursday and Friday; at 2 p.m. and 7:30 p.m. on Saturday and at 3 p.m. on Sunday.