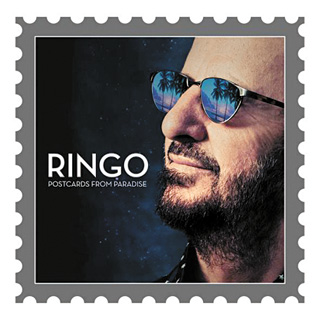 
“We were sleeping on the floor, eating bread and jam,’’ Ringo Starr sings, retelling the story of the early days of his band.

Then comes the chorus: “We were Rory and the Hurricanes.’’ Wait. You were who now?

The mystery is solved toward the end of “Rory and the Hurricanes’’ when he sings that by the next tour, “I was with you-know-who/ I play the drums like I always do.’’ Indeed, the Fab order of the universe is restored. As if to add a percussive punctuation mark, a basic yet swinging drum solo follows in that inimitable Ringo style.

Forty-five years after the Beatles officially called it quits (and about a decade more since he left Rory Storm and the Hurricanes to make history), Starr’s “Postcards from Paradise’’ comes with plenty of lyrical and musical blasts from the past to remind listeners of his role in music history.

Overall, “Postcards’’ entertains as much as it reminisces, but doesn’t break musical ground. Still, it’s a mostly fun ride that’s musically strengthened by the All-Starr Band.