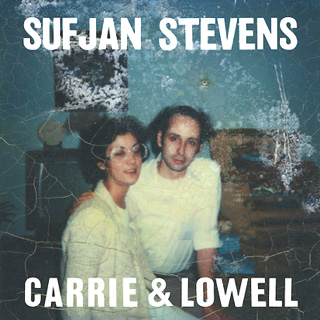 Plucked strings and pulsing keyboards dominate the distinctive arrangements on Sufjan Stevens’ latest album, and in the absence of a rhythm section, they serve to keep time.

But time’s not for keeping, and that’s the message.

“We’re all going to die,’’ Stevens sings, putting perhaps too fine a point on the matter.

“Carrie & Lowell’’ is named for Stevens’ mother and stepfather, and Carrie’s death in 2012 inspired the intimate 11-song cycle. Along with mortality, Stevens contemplates love and longing, ghosts and grieving, remembrance and regret, forgiveness and faith and even fossils.

“What’s the use of singing songs?’’ he asks, and the album answers with music that finds beauty in sadness. His wispy vocals are an ideal match for the delicate melodies, and there’s a dreamy ache to simple arrangements that turn otherworldly, as if alternating between the here and hereafter.

It’s not so funny how time slips away. But amid the tick-tock rhythms of “Carrie & Lowell,’’ there’s comfort to be found. AP