Seoul orchestra moves on after its controversy

Seoul orchestra moves on after its controversy 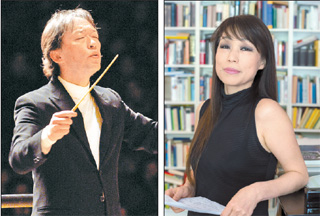 Not long after being mired in controversy, the Seoul Philharmonic Orchestra has kicked off its season with Unsuk Chin’s “Ars Nova” series. The contemporary program was created by Chin, the orchestra’s permanent composer since 2006, for an organization that is more familiar with classical performances.

“I assure the people that the Seoul Philharmonic Orchestra is one of the few orchestras in Korea that reaches an international level and that the audience will not think about the controversy it has been embroiled in because they will find the true value of the orchestra through the ‘Ars Nova’,” said Chin at a press conference held last week at Sejong Performing Arts Center in central Seoul.

The first performance was staged last week under the baton of assistant conductor Choi Soo-yeol at the Sejong Chamber Hall, followed by the world premier of “Mongta,” a new piece of chamber music composed by Park Myung-hoon.

The orchestra has supported new and young artists through the program in order to invigorate the classical music scene in Korea.

For its second series, “Meditation and Mysteries,” world-famous maestro Chung Myung-whun will perform with the orchestra along with Kang Hae-sun, an esteemed violinist and a professor at the National Conservatory of Paris, tonight at LG Arts Center in southern Seoul.

“Chung is the one of the most well-known musicians who perfectly interprets French classical music, and Kang has studied music in France. I believe this duo will show an overwhelming performance,” said Chin.

“Metaboles” by Henri Dutilleux (1916-2013) and “Quatre meditations pour orchestra” by Olivier Messiaen (1908-92) will be performed, along with the Asian Premiere of “Concerto for violin and orchestra,” composed by Pascal Dusapin for the second concert.

The three listed songs are written by the renowned French modern classical musicians from the early 20th century to recent years.

“Ars Nova’ will fascinate the Korean audience and they will know the orchestra has musically matured. The controversy was just one of the steps we had to go through,” Chin said.