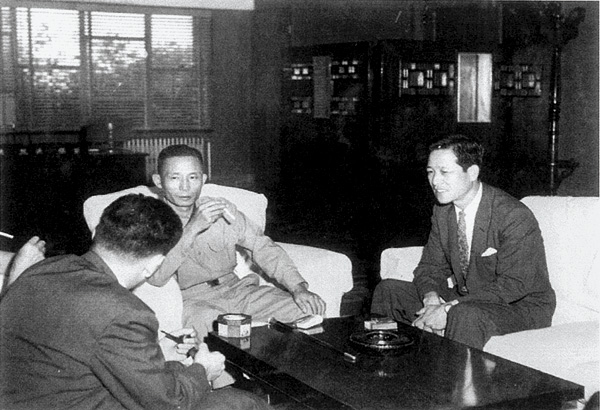 Chairman of the National Reconstruction Supreme Council, Park Chung Hee, center, has a meeting with Kim Jong-pil, right, director of the Korean Central Intelligence Agency, during a visit to the agency’s headquarters on Aug. 31, 1961. [National Archives of Korea]

After the launch of the supreme council for national reconstruction, I was often asked why I didn’t participate in its meetings. On June 5, 1961, I was asked that question during my first press briefing as head of the main spy agency.

I answered, “I intend to do my job behind the curtain as the head of the Korean Central Intelligence Agency.”

My mission as an architect of the revolution was completed with its success. I was now determined to put my utmost efforts into supporting it from behind the scenes. In the first few months, someone had to take the lead in suppressing challenges and opponents that sought to undermine the revolution’s foundation. Many found such a task too intimidating and challenging.

I had no choice but to step forward again by founding the Korean Central Intelligence Agency [KCIA] and leading it as its first director. 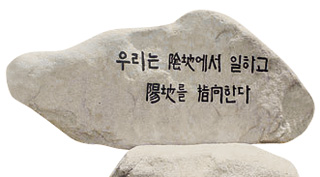 Kim’s motto for the Korean Central Intelligence Agency: “We work in the shadows to protect the sunlit land.” [National Archives of Korea]

On May 20, four days after the revolution, I was appointed the head of the KCIA. My first task was to recruit bright young minds. I called in many of my fellow military academy graduates including Seok Jung-sun, who had turned down my request to join the revolution earlier that year. I figured I needed him for his intellect. On May 23, we had our first office open in Seoul.

Basic ideas on how we were going to run the KCIA were modeled on the Central Intelligence Agency of the United States. I had nurtured the idea of introducing a CIA-like intelligence agency to Korea after I attended a lecture by an American CIA official in 1958 at the army headquarters. I came to the conclusion that Korea needed an organization modeled on the CIA that would collect and analyze intelligence and process it as classified information to brief the president.

But collecting and analyzing was not enough given the nascent status of the revolutionary government. Its foundation could be rocked at any time if someone organized a hostile force against it. My role had to be focused on keeping a vigilant eye on people who could potentially pose a threat while also monitoring North Korea.

I concluded that we should empower the KCIA with investigative authority. With assistance from legal experts, we drafted a law in regard to the management and operation of the intelligence agency that included a clause that gave it the authority to investigate.

On May 28 I briefed Park Chung Hee on the envisioned authority and responsibility of the KCIA. and Park was satisfied. On June 10, the law regarding the KCIA was promulgated.

I was also responsible for creating its motto. The CIA’s motto is, “And you shall know the truth, and the truth shall make you free,” from the Bible. I wanted to describe the KCIA’s mission and its responsibility concisely. So I came up with this motto: “We work in the shadows to protect the sunlit land.” To make the revolutionary government succeed, intelligence agents would be forced to do their jobs in complete obscurity.

The public must be shown the revolution’s achievements, not the people who made them possible. It was absolutely acceptable that people did not recognize our efforts as long as the commander in chief made the best out of our intelligence for the sake of the country. I wanted to reflect that philosophy in the motto.

To recruit KCIA agents, I called in many officials from the military, including army headquarters and its counter-intelligence division, who were experienced in intelligence gathering. We even recruited one agent who had decoded encrypted U.S. Navy code during World War II as a Japanese Imperial Army official. We sought people experienced in the field. What was equally important was to produce officials with intelligence capability. So we set up an intelligence school in Seoul.

To create a backbone of the revolutionary government, I thought there had to be at least one government institution that should be feared by the public. To be fearsome, the KCIA ought to do its job in strict accordance with the law without special or unfair treatment.

Soon after its establishment, the KCIA successfully backed up the revolutionary government with its strong investigative authority.

From the beginning, I intended to empower the KCIA with investigative powers only to help the revolutionary government do its job. After the military government stepped down, I promised such authority must be relinquished because of the potential trouble caused by its vast power. Giving the KCIA investigative authority was the equivalent of combining the authority of the CIA and the Federal Bureau of Investigation in the U.S.

But my promise wasn’t kept. I stepped down as KCIA director in January 1963. The military government relinquished power to a civilian elected-government. But the KCIA kept its authority to investigate and has been blamed for abusing and politicizing its power many times since. It is still trying to hold onto the authority it promised to hand over. The motto that I drafted has also been damaged. I do feel responsible for its abuse of power and misdeeds as its founder.