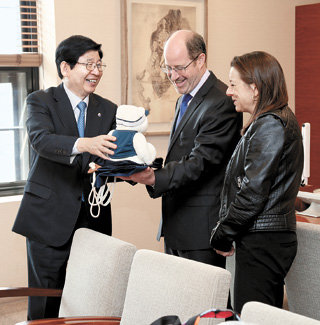 Yonsei University President Jeong Kap-young on Thursday presents a souvenir to Allen Raymond, the great-grandson of John Thomas Underwood, who contributed to the establishment of the university in 1915. Provided by Yonsei University

The great-grandson of John Thomas Underwood, who contributed to the establishment of Yonsei University in 1915, made an unexpected visit to the school on Thursday with his wife and son.

“After all that time hearing [about this place] from my grandmother, I finally came here,” Allen Raymond said in a meeting with the university’s President Jeong Kap-young.

Raymond’s visit to the university came as a surprise to Yonsei officials, who were only expecting to see Peter Underwood, the great-grandson of school founder Horace Grant Underwood.

Raymond visited the school to discuss his son’s college admission to the university.

“Underwood established this school, his son served as an educator, and his grandson participated in the (1950-53) Korean War,” Jeong said. “This is a good example of how an individual’s dedication has wielded such influence over 100 years.”

John Thomas Underwood is recognized as an original contributor to the university. His younger brother, Horace Grant Underwood, who came to Korea as a missionary in 1885, established the school in 1915 under the name Chosen Christian College.

At the time, John Thomas Underwood, the owner of the typewriter manufacturer Underwood Typewriter Company, donated $50,000 to help his brother build the school.

Horace Grant Underwood used those funds to purchase 155 acres of land that would later serve as the base of the current university. The university’s main building, Underwood Hall, was also built with the donation and was later designated a historical landmark.

“He [J.T. Underwood] was a good brother, who saw after his younger brother by accompanying him from New York to Chicago, as well as a big sponsor, who sent money to him when he faced difficulties founding the school,” Raymond said, referring to his great-grandfather.

In addition to the two Underwood brothers, the family is known for their devotion to the country. Horace Grant Underwood’s son and grandsons all lived in Korea and used Korean names.

Educator Horace H. Underwood, known here as Won Han-kyung, continued his father’s legacy, and his son, Horace G. Underwood II (Won In-han), served in the Navy following the outbreak of the Korean War. After participating in Operation Chromite, the infamous Battle of Incheon, in 1950, he served as the primary interpreter during armistice negotiations.

During his visit, Raymond toured the university’s campus.