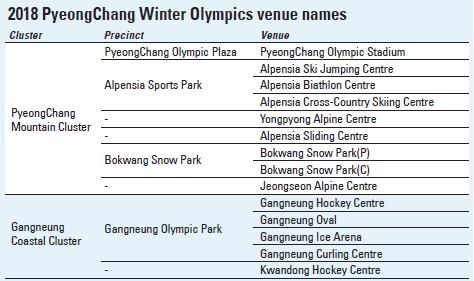 The PyeongChang Organizing Committee for the 2018 Olympic & Paralympic Winter Games (Pocog) said on Tuesday that it has confirmed the names of the 20 facilities that will be used during the Winter Games, after discussing the issue with the International Olympic Committee (IOC).

According to the IOC master schedule plan, the Pocog can submit the names of facilities until the end of 2016, but in order to use the confirmed names in official brochures and international events to promote the events more easily, the Pocog said that it decided on the names of the facilities earlier than scheduled.

“By using the official names of the facilities, we hope the brand value of cities like Pyeongchang, Gangneung and Jeongseon will be improved, while promoting tourism complexes like Alpensia, Yongpyong and Bokwang to the world,” the Pocog said in a statement.

The organizing committee said that the names of the facilities were decided after collecting opinions from the regional government as well as sport federations. Although the names are for the quadrennial event, since those names are considered part of the event’s legacy and can be used afterwards, the organizers said that they considered various aspects, including easy public recognition and relation to the sports.

“In the naming process, the provincial government and city government all participated, and it has served as opportunity to strengthen our cooperative relationship with them,” the Pocog said.

There will be two clusters for the Olympics, with the PyeongChang Mountain Cluster for skiing and snowboarding competitions and the Gangneung Coastal Cluster for hockey, curling and skating events.

In January, the Pocog announced the preliminary names for the venues, and few changes were made from the previous version. For instance, the Gyeongpo Oval, where speed skating events will be held, has been changed to the Gangneung Oval, while the Yulgok Hockey Centre has become the Gangneung Hockey Centre.

This is because all skating events are held in Gangneung, a city in Gangwon located about 150 miles east of Seoul. The organizers said that it has placed the city name in all facilities to promote city’s support of ice sports.

For Pyeongchang and Jeongseon, two cities considered to be part of the winter-tourism region, the organizers decided to keep the names of the popular resorts to boost tourism.