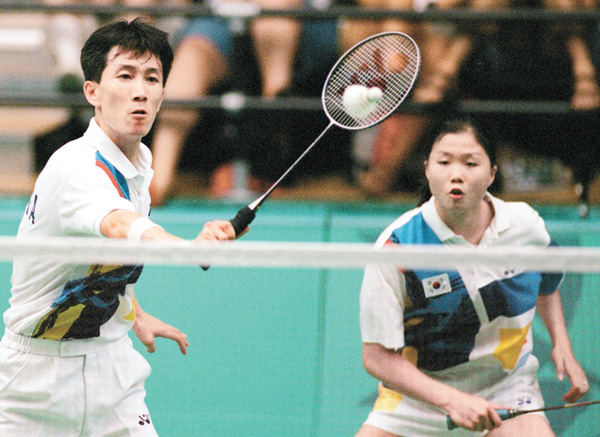 Not many athletes see their name become a brand for products, especially in foreign countries. While this kind of privilege was thought to be reserved for superstars like Michael Jordan or Jack Nicklaus, Korean badminton player Park Joo-bong is also one of them.

Today, Park’s legacy lives on. There is a Korean manufacturer that sells Joobong badminton rackets in China, Thailand, Singapore and the United States.

Park is Korea’s only recipient of the Herbert Scheele Trophy, named for the late secretary of the Badminton World Federation (BWF) and English Badminton Association, who also was a referee for the All England Championships for 23 years. 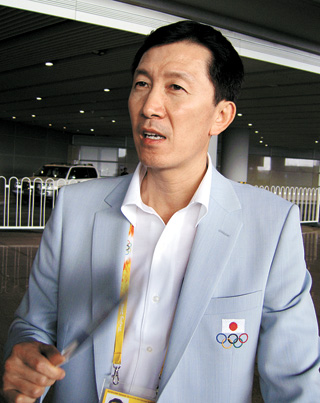 Often known as the “Nobel Prize” in badminton community, the Herbert Scheele Trophy is presented by the BWF Council for outstanding service to badminton when there is a deserving recipient. So far, only 17 awards have been presented since 1986. Park was honored in 1996.

The 50-year-old Park won 72 international competitions in his career, including 32 victories in men’s doubles with Kim Moon-soo and 25 in mixed doubles with Chung Myeong-hee.

Although some critics say Park’s achievements were mainly in doubles, he showed he was capable of competing in singles events -- such as in the Thomas Cup ? early in his career. In domestic competition, Park had 106 consecutive wins in the early 1980s.

Born in Imsil County in North Jeolla, Park started to play badminton in third grade at Poongnam Elementary School in Jeonju, North Jeolla. Like many top athletes, Park was heavily influenced by his father, who was a teacher at the elementary school and starter of the badminton team.

In fact, his father was 186 centimeters (6-foot-1) tall and a soft tennis player in high school. Park, the youngest of six siblings, inherited his father’s DNA and started to rise from the start, winning junior competitions.

“Back then, Korea was like a barren land,” said Park in an interview last year. “Without proper training books, my father even translated Japanese magazines to teach badminton.”

At Jeonju Agriculture High School, Park started to rise as an international star. In his first year, he competed in the 13th Korea-Japan high school exchange competition in Japan and easily beat the Japanese high school champion.

At the age of 16, Park was on the national team. As a high school senior, Park won the Denmark Open with Lee Eun-ku, becoming the first Korean team to win the men’s doubles at the international event.

Due to his father’s philosophy that athletes should never overlook their studies, Park entered Korea National Sport University in Seoul, despite being criticized for leaving his hometown. His father, then an educational supervisor for North Jeolla, said his son received an offer from Wonkwang University in the North Jeolla region, but thinking of his future decided to send Park to Seoul.

In 1983, Park met Kim Moon-soo, who is was year older. For a decade, they made history in world badminton. With right-hander Park taking care of short net plays, Kim was a lefty who was good at serving and smashing.

Because badminton did not become an Olympic sport until the Barcelona Games in 1992, Park had to wait nearly nine years to get the gold medal, winning the men’s doubles with Kim. At the time, mixed-doubles was not an event.

After the 1992 Olympics, Park and Kim announced their retirement, but after pressure from Badminton Korea Association (BKA), they returned in 1993 to win the men’s doubles at the Sudirman Cup, then Park retired again in 1994.

While he was working as a teaching assistant at Korea National Sport University, Park returned to play in the 1996 Olympics in Atlanta after hearing that mixed-doubles was included in the Summer Games. With the news that the living legend was coming back, some nations decided to withdraw their mixed-doubles teams and focus on other events.

With his partner Chung retired, there was friction between Park and the BKA about who would be his mixed-doubles partner, but he and his student, Ra Kyung-min, started to win various international events. In Atlanta, however, they lost to compatriots Kim Kyung-moon and Gil Young-ah in the finals to claim a silver medal.

After the 1996 Summer Games, Park joined the England national team as an assistant coach and visited other European nations to give lessons. In 1999, Park moved to coach the national team in Malaysia, where he was treated like a superstar who was still an active player.

In 2003, Park went on to give lessons globally as a special ambassador for the BWF to promote the sport. He returned to Korea as a national team assistant for the 2004 Athens Olympics, but departed to coach the national team in Japan, where he has been coaching ever since.

With Japan, Park managed to deliver the country’s first ever Olympic medal in women’s doubles at the 2012 Summer Games in London, and last year guided the men’s team to its first gold medal in the Thomas Cup. He recently renewed his contract to lead the Japanese team through 2016.